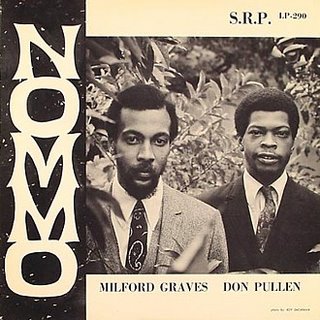 It's been a minute since I've had a good soul-cleansing free jazz session, so I am going to get as far as I can through Thurston Moore’s Top Ten Free Jazz Underground records before I sprout tentacles and/or gain the power of heat vision.

I am going to go out on a limb here and confess that I find Thurston Moore the musician a hair overrated, and I say this having been a Sonic Youth follower and at times, rabid fan, for the last twenty years. They are really good, mind you. He's really good. Both are occasionally fantastic, but the sun neither rises nor falls with Sonic Youth, at least not for me anymore.

What is spectacular and singular about Sonic Youth is their role as art catalysts. Their name radiates an exploratory zeal, leaving you thirstin' for more (get it?) of that which is outside what you already know and like. What Sonic Youth has done, that no one in the avant garde community has done since maybe Miles Davis, is put a cool, pop face on Out Music. I was talking with someone recently about the Bang on a Can Marathon that took place last February, and my frustration about not getting more people out to see it, and that person explained that they didn't go because it sounded stupid, like "Stomp" or something. But when they read that members of Sonic Youth had done things with them, he wished he'd gone. Like Mick Jagger with his dabblings in avant-garde cinema in the sixties, Sonic Youth sets up a rope bridge across the chasm between these two worlds that the kids might just be willing to cross.

So with that, I always take heed when Thurston Moore comes out with a list on something because he is genuinely interested not only in the music but in getting other people interested in it, which is right where I'm at too.

Dave Burrell - Echo - I like the way Dave Burrell operates on this record, and in general. "Echo" opens mid cacaphony, like swinging open a door to a chimpanzee party, but quickly, you get acclimated to teh push-pull of the near chaos and join the party. The second side "Peace" is not peaceful in the same way John Cage's silence is rather noisy. You get to the idea of peace by bracketing confusion, breaking it down into elements, laying them out when needed (like the extended piano arpeggios) just so you can know these things at an intimate level. Peace, here, and in the world, is not an elimination of discord, it is a mediation and recognition of oneself in it.

Milford Graves & Don Pullem - Nommo This album deals in all the empty space in eth room, as opposed to the predecessor which focuses on the activity. There is a sense in this recording, possibly by the shaky fidelity, that you are looking away from the subject, especially on side one. The music feels peripheral, not in the sense that it is unimportant, but that is offering the things that happen outside the channel of music. I really like that brand of free jazz; I've thought it would be interesting to write music to play while this kind of music is playing.

Arthur Doyle Plus 4 - Alabama Feeling - Out of the first three on the list, this feels the most like "jazz" - shorter songs, chorus and solos, a deeper sense of groove than the preceding two. Mr. Doyle practices what he calls "free jazz soul" which by pushing the fiery side of his playing closer to a more easily digestible swing, creates a lot of cognitive friction, much in the same way Alvin Ayler's R&B experiment New Grass did. This album is good, especially "Ancestor" but the real Doyle album in my mind is Noah Howard's Black Ark, reviewed here, where the crossed beams of Howard's and Doyle's saxophones can lay waste to all set before them.
Posted by Alex V Cook at 8/05/2009 03:52:00 PM