Continuing through Thurston Moore's list of top 10 Free Jazz Underground... Part one can be found here. 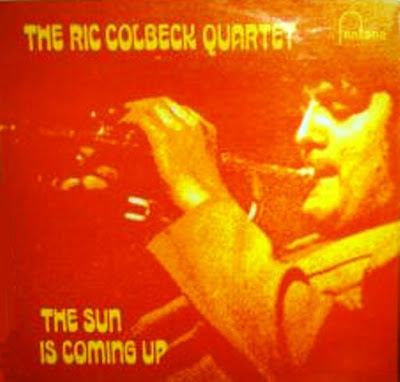 Sonny Murray - Sonny's Time Now - the fourth album on the list is one I've been wanting to hear for years. Muddy and lo-fi as hell, the spelling of Sunny's name contrasting with the way it is spelled everywhere else, that awkward cover - I understand that the back cover is blank - with Albert Ayler letting demons fly from his horn and Amiri Baraka reading his poem "Black Art". The album was released on Baraka's own Jihad label and might be as close to the fire of the 60's loft scene as one might be able to get.

The Ric Colbeck Quartet - The Sun is Coming Up - This exhortation from Destination:Out kinda says it all for both this record and the experience of listening through another's list of records.

It’s always satisfying and not a little surprising when one of the grails of avant jazz turns out, when finally found, to deliver the goods. It’s as if, for one brief, blazing moment, one’s faith is restored, and justified (if not one’s dorkiness).

John Tchicai and Cadentia Nova Danica - Afrodisiaca - At first listen, this record doesn't really belong with the others. Rather straightforward sax lines of the late-night, hanging-by-a-streetlamp, variety. Quickly though, this music is swamped by an menacing Enormity, a group of 25 or so players loom over this record like a massive invasion UFO does over a city. It is spy-noir themes performed by massive clouds.