[outsideleft] Bob Dylan Sure Grows One Hell of a Mousatche

But what hides behind it? Alex V. Cook looks for clues in the latest "official bootleg" Tell Tale Signs

Thanks to the benevolent, knowledgeable souls at National Public Radio, both discs of the latest Bob Dylan collection Tell Tale Signs have been made available, at least temporarily, from their website. It’s a smart way to preview something actually, letting the Dylan-worshipers at NPR (I don’t know this to be fact, but I think it’s a safe bet) come off like Prometheus bringing fire to the shivering masses, because, well, they are, and there is always something elemental about Dylan, be it a fiery blaze, a gale wind or a slog through the mud. 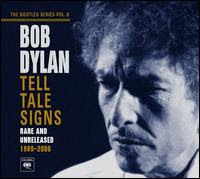 Tell Tale Signs is not a real album per se, but the latest of the official bootlegs by Columbia.

This format really suits Dylan well, the paradox of an official unofficial release from a unique chameleon. On these bootlegs, he’s looser, jangly than on Time out of Mind, Love and Theft, Modern Times and Oh Mercy, the albums whose sessions these lean demos and rehearsals are culled. The songs are well-served on this paper plate in my opinion; the recent Dylan albums sound great, hell they should if you have somebody like that calling the shots, but they don’t adhere to me; instead they two-step right off me. Such the curator he’s become, I find I prefer his satellite radio show to his albums nowadays.

His most recent songs and persona are clearly about a thing, but not the thing itself, and where that was a strength for him in the past, it strikes me as a slight liability now. Perhaps we don’t want to allow an old man his secrets, we demand transparency from a guy who is the definition of opaque.

The sincere love songs here, like Modern Times’ “Someday Baby” rendered as a march through Nashville's Music Row, sound suspect coming from an old dog this sly, and that is the thread running back to the half lidded Pan-in-boots-of-Spanish-leather Dylan from nearly half a century ago. Same with “Tell ‘Ol Bill,” a simmering honky-tonk number from the North Country soundtrack that keeps going and going and going until the narrator has exhausted. neither song has the old magic, but there is a whiff of smoke on them.

The songs leftover and/or reworked from Oh Mercy, his maudlin late-life-crisis painted out on Daniel Lanois’ black velvet canvas back in 1989, come out the best, his spectral fake-soul croon and bluesy jive talk is more effective to me than his more recent Bob Wills act. “Everything’s Broken” stretches the metaphor of being broken to form a lampshade, his white rage underneath give off comforting warmth. “Series of Dreams” has a little Joshua tree datedness about it, but “God Knows” with its VU-through-Luna jangly strut is rather genius. Same with “Dignity”-it's an earnest if uninspiring blues about race that blooms into something dazzling in all that crystalline reverb. Maybe Oh Mercy should have been a double album.

The finest track on the disc is the single “Dreamin’ of You” a discard from Time Out of Mind that was allowed to season for a decade. It’s as subtle as a song by Simple Minds, undulating over a rather icy guitar groove throwing out proclamations like Somewhere dawn is breaking/Light is streaking across the floor/Church bells are ringing/I wonder who they're ringing for – moon-in-June shit for a guy that challenges 13-year-old Rock Band contestants to keep up with “Tangled Up in Blue”, but it rather works. When I first heard it on the radio, before his croak revealed the author, I caught myself thinking now that is a smart indie rock lick.

The slickness of the recordings culled from studio sessions hardly makes this feel like a “bootleg” as much as it does a B-side collection, which is where the live recordings come in. “Ring them Bells” has a thick hazy gravity missing from the original track on Oh Mercy and TJ Arnall’s “Cocaine Blues” sounds like a cozy old number with The Band and the Carter family’s “Girl on the Greenbriar Shore” might have snuck into the acoustic portion of the prophetic “Royal Albert hall” bootleg. “Lonesome Day Blues” is Dylan- in-blues-mode by the numbers, but you could have worse numbers frankly.

The elegiac tones of “Cross the Green Mountain” had a whiff of “Freebird” to them, and for a moment there, I thought Bob Dylan swamping up Skynyrd was going to be the greatest moment in sappy music since Morrissey tackled “Moon River” back in 1995. Alas, it’s merely a ham-fisted credit roller from the movie Gods and Generals, and maybe that is the perfect statement for this collection. Bob Dylan started out meta and consistently stayed one meta- step ahead of the rest of the meta-pack, and the fact that he can still do it a very real forty years down the road is something to be noted, albeit a something that is masterfully obscured.