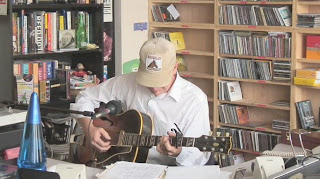 asks Lambchop's Kurt Wagner incredulously during his NPR Tiny Desk concert. Lambchop is not unlike this podcast, I wholeheartedly appreciate and support them it and I have been a long time subscriber but rarely remember to listen to them. 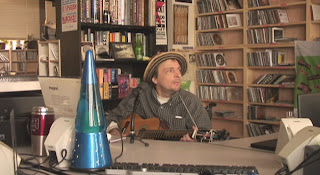 The Vic Chesnutt one starts with this poignant moment while he strums his guitar waiting for the producer to shut up so he can start playing, and continues in a sweet, tragicomedic parabola from the broken heart to the cosmos. Plus, mouth trumpet! which he uses to great and hilarious effect on his new album Dark Developments, which you should also check out. You can still not-really-like Elf Power who work with Chesnutt on this record and still love it - I kinda think Vic has an almost parasitic way with collaboration, taking over their whole system and slyly converting it into a means to project himself. He's like a virus that makes your band better.

"Glossilalia" is one of the highlights - Vic says Jeff Mangum (Neutral Milk Hotel) came over to his house and sang a melody to him, asking that he write words to it, and out of this came this touching song about lonely atheists living in crowded Christian world. You can hear it totally as NMH song, with soaring changes like jerking a car off the main road onto a gravel driveway, and Vic lives in the song quite well. I think a collaborative album between them would possibly be the best record ever, and given that the reclusive Mangum recently popped in on some Elf Power shows, it s not out of the realm of possibility. And if this post is somehow a letter to Santa that makes this collaboration appear, let me ask for cameos from Jonathon Meiburg from Shearwater and Antony from Antony and The Johnsons and you will have the ultimate Alex V. Cook Battle of the Male Indie Rock Divas album.

Oh, and bring them all back for a star studded version of Danzig's "Mother."

Here is a whole Shearwater concert if that sweetens the deal. I agree with Bob Boilen that Rook is one of the best records of the year. Thank you NPR! Almost makes me want to follow through on sending that pledge!
Posted by Alex V Cook at 10/15/2008 11:05:00 AM