When 50,000 Hippies Descended on Prairieville 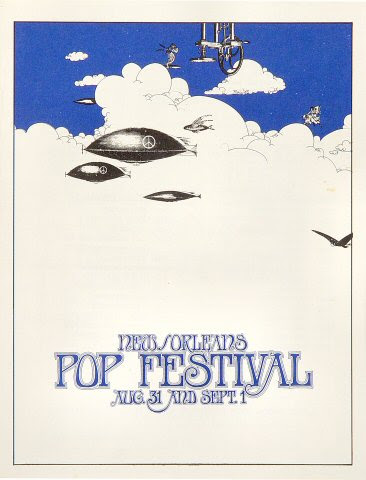 from Wolfgang's Vault
Just came back from a walk through 30 Years of Rock and Roll: Photography by Larry Hulst at the LSU Union Gallery, usually the site of poster sales (beforehand, my friend Lance remarked that maybe this was a poster sale being portrayed as an exhibition). The exhibit is an affable set of classic rock photos, narrated by the photographer's comments on the gallery labels, listing how difficult a particular artist was, or how rough a show or how far he drove for it.

Here is but a sampling

If you are on campus and your compass needle points to magnetic Rock like mine does, check it out. What I left there with, besides a collection of wise-ass remarks about each photo, was this semi-related question:

Where are the photos from the New Orleans Pop Festival at the Baton Rouge International Speedway in Prairieville, Louisiana, Aug 29 - Sept 1, 1969, two weeks after Woodstock?

The poster that advertised the event and listed all of the performers and the times they would play also came with a caution: 'Narcotics are prohibited by federal and state law. At least one person died at WOODSTOCK this month from bad ACID. Do not buy DRUGS at the festival. We are told that plain clothes detectives will be in the crowd. If you are smart you will AVOID OBVIOUS CONSUMPTION OF DRUGS." As a further precaution, the poster added, 'Police will remain outside the speedway unless our private guards are unable to keep order. IT'S UP TO YOU."

Prairieville is now the sprawl overflow of Baton Rouge, filling the gap between Baton Rouge and LaPlace with Good Christians and mini-mansions. Not a bad place, but not one I'd exactly paint as a counterculture hotbed today. I can only imagine the reception awaiting busloads of flower children disembarking there in the summer of '69.

I really want to hear Tyrannosaurus Rex rocking the racetrack in Prairieville; if only Marc Bolan fans were as diligent as those of another act on the bill. Here is The Grateful Dead's performance from that weekend, streaming from the third eye of Ascension Parish, courtesy of the Internet Archive

and footage of "White Bird" performed by It's a Beautiful Day. I'm not positive this is from that event, but Pam (a.k.a RealCurves) in the comments was there. She has a story but isn't telling.

It's a Beautiful Day - White Bird


Wild Bill Delaune Jr. alludes to the event in this article in Ascension Magazine

Later that same year 1969, Prairieville also made headlines for its part in the nation's "Summer of Love' It was an uneasy time. Intergration in the public schools was progressing amid social opposition. During the summer 50,000 hippies descended on the area for a pop music festival held at the racetrack. There were three major pop festivals that summer. The most well known was Woodstock, of course. There was also one in Atlanta where Jimi Hendrix debuted his famous guitar version of "The National Anthem, and then there was Prairieville. "It was kind of funny," Bill said. "The festival was billed as "The New Orleans International Pop Festival at the Baton Rouge Speedway in Prairieville, Louisiana'. I won't bore you with the details but let's just say it was quite a memorable time. We had more than a little fun. "I even got to meet Janice Joplin."

Totally bore me with the details! Where is this poster warning the wide-eyed children of the South of the dangers of acid? Where is the ticket stubs? Who among the people walking around in my daily life in Baton Rouge was conceived on a blanket out on that Speedway?