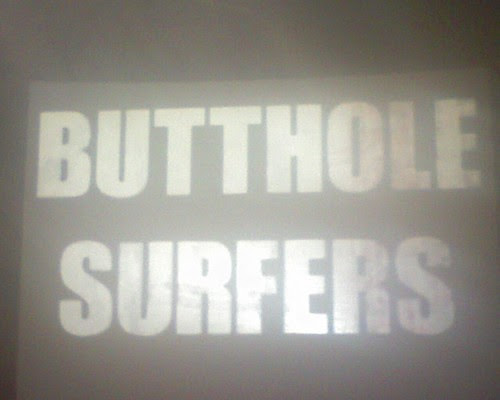 was totally amazing as a closing act to Voodoofest 2008. More detailed breakdown forthcoming but... wow. The above photo was the final frame of one of the three different projections beamed around the tent after they had filled the place with fog. I didn't see the Nine Inch Nails show but heard it was a multimedia juggernaut, but I'd think it would have had to be rather impressive to outdo the Surfers.

Terrible audio (and terrible video actually, thanks to the coupling of my phone and YouTube, but here is a taste of what the hour+ multi-media blitz was like

At one point as Gibby arguged with the sound guys for an eternity before they started, he just shouted "check" into his elaborate delay set up and let it repeat "check...check...check...check..." for about five minutes inciting a chant-a-long, and then an uneasy feeling that this was going to be the show.

Unrelenting, ridiculous, calloused, dilettante, oversaturated, clichéd - it was like the A/V geeks from high school finally having their revenge on all the cool people that threw spitballs at them while they set up projectors in science class, and in all those ways, it was perfect.
Posted by Alex V Cook at 10/27/2008 08:21:00 AM