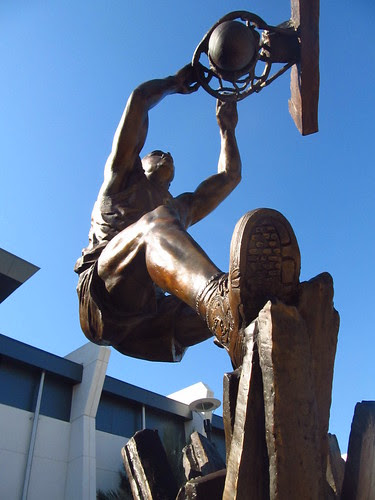 The new statue of Shaquille O'Neal on campus. I wish birds would line up on that section of the backboard.


Wednesday:
Richard Swift, Walt Wolfman [His records are like Oreo's: I could eat them all day and forget I ate anything]
Is Tropical, South Pacific [These bands sound like the presets on the Casios that used be on display department stores, or that they think Joy Division oughta be joyous if they are gonna call themselves that]
The dB's, The Sound of Music and "Revolution of the Mind" [#JangleWallStreet]
Radio Birdman, The Essential Radio Birdman [As you will see below, birdmen are essential]
Blue Öyster Cult, Tyranny and Mutation [My favorite band from 5th grade. I forgot Patti Smith did stuff with them]
The Chesterfield Kings, The Mindbending Sounds of the Chesterfield Kings

Thursday:
Thomas and the People, Beneath the Trees [streaming from their site; kinda like DMB without the bad DMB parts]
Lynyrd Skynyrd, Gimme Back My Bullets [Their plane crashed on the way to Baton Rouge 34 years ago today. The linked article contends that in 1977, Aerosmith was going to rent the same plane and crew and thought they weren't up to their standards.]
Tom Waits, Real Gone [After years of mythos-eating devotion, I now generally like everything about Tom Waits except listening to his records, but I still do it. Why isn't his forthcoming one Bad as Me growling away on NPR Music like it should be?]
Tedechi Trucks Band, Revelator [recommended by McSweeney's]