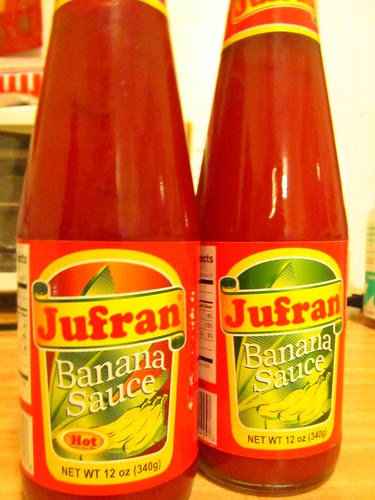 So, you are saying your pantry is stocked with just the one style of banana ketchup?

Then:
NOWNESS [Set the controls on the heart of the [nowness]; best webzine I've seen in a while.]
The Bottle Rockets, Not So Loud: An Acoustic Evening with the Bottle Rockets [They are kinda the best band.]
The Gourds, Shinebox [Yes, for the cover of "Gin and Juice", so what?]
Drive-By Truckers, Gangstabilly [For Steve McQueen, God , and country]
Donna Lethal, Milk of Amnesia [Though it is not on Goodreads, I did finish and love it. More in-depth commentary hopefully forthcoming.]
Aloe Blacc, Good Things [I keep thinking this is an eponymous record, maybe because it sounds like a direct line from somebody.]
Per Petterson, I Curse the River of Time [I love a European novel that involves ferries or trains, which is convenient, since they all involve ferries or trains.]
Labyrinth [I saw it twice though Maya claims she's seen it seven times this weekend.]
Fringe [Getting caught up with time-travel shows means getting further behind, I think.]


Now:
Annie Gosfield/Lisa Moore, Lightning Slingers and Dead Ringers [HT to aworks]
Tim Hecker, Ravedeath, 1972 and Dropped Pianos [HT to everybody. This sounded particularly cool with Walter from Fringe intoning from another screen/dimension in the background.]
Dirty Projectorts + Björk, Mount Wittenberg Orca [Wasn't this out already? Did buying two kinds of banana ketchup before watching Fringe open some sort of causal wormhole? I could see this album resulting from such an intersection of causes. Or maybe if you played an Andrews Sisters record for Schrödinger's cat. Something.]
United Bible Studies, The Shore that Fears the Sea [Y'all know about these folks? Me neither!]
Zooey Deschanel singing the National Anthem at Game Four of the World Series [Not quite as bad Natasha Vargas-Cooper makes it, but I'm into her derision at Grantland. She has a point. "Where is the drama of a sweat-drenched Whitney Houston, steeped in struggle, unhinging her jaw to bellow out Our Song? The drums of war echo in her crack-ravaged throat! "]
The Magnetic Fields, Holiday [like riding a hoverboard through a puddle]
Joan of Arc, Life Like [Wow, Joan of Arc has a lot of albums with a lot of songs and they all have great titles even if that dude can't really sing any of them.]