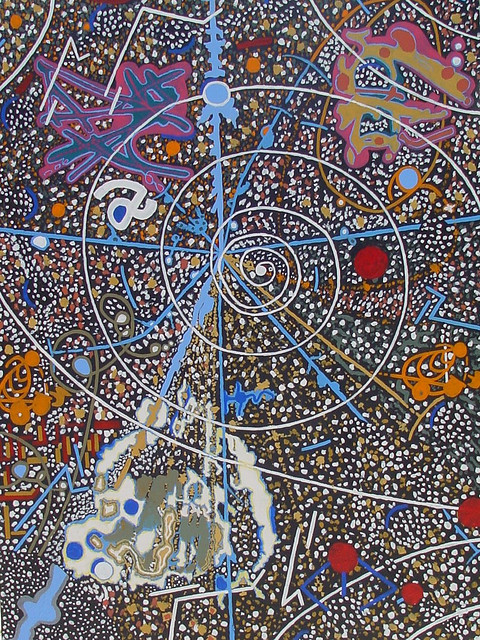 David Rush, "Free Radicals" 2006. More of David's art can be seen at his Flickr page.

Back in the early 1990's I hosted a radio show for experimental music on KLSU with one of my friends. It ran late Saturday nights when no one was listening, a perfect place for Geoff and I to vent our needs for aural weirdness. We had our preferences: Geoff went for highly textured sample-driven pieces; I was all about 60's free jazz loft catharsis and dada art pranks. It worked because these puzzle-less pieces started to find a way to fit together.

This show attracted like-minded disparate thinkers. A grad student with a difficult personality and even more difficult jazz records started showing up. One of our regular callers resided in a halfway house. Another was a sixteen year old misfit who we met in person one evening when her dad dropped her off at the back door of the station at 11 PM and drove off. It also attracted David Rush.

David was then, and on into adulthood, a calming influence. His deep voice, always deeper than you expected to be coming out of his sweet, round head, took on the mannered hush of an air conditioner kicking on when he spoke. While the rest of us were turning our personal manifestos into unlistenable playlists, David played calm music. Music that moved but stood still. Stuff woven of calm methodologies and a willingness to wonder. There were clashes among this gaggle of radio hosts with something to prove to our no listeners, so much so that another friend did an ethnography of this late night dysfunctional family. David just quietly waited until he could play his records. The last conversation David and I had in person was about Klaus Schultze.

I lost touch with David over the years until I encountered him at a local art show, or more correctly, encountered his work. His paintings are joyous, curious things, as dense and methodical as the music he loved. They are fantasies and sci-fi landscapes and computational grids, vivid and purposed, but not looking bully your eye. He believed in science and process and philosophy and I gathered that those things coalesced into a form of spirituality for him, which is how a spirituality should form.

The circumstances of his passing are unclear, but it seems that he had an ongoing medical problem that overcame him and and he died in his sleep. So, wherever/whatever that spirit is now, here's hoping the sky is filled with nice, round stars and the wind makes a low electronic throb through the trees.