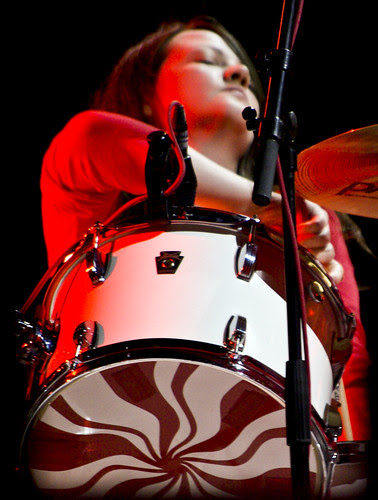 See ya, White Stripes. It was good while it lasted. While everyone is calling Smith Westerns "glam" I think they mean "lush". Glam, I think cocky, stripped-down with a sense of panache deep in the background. They immediately made me think of putting on Queen instead, for some reason, who are glam, lush and everything else you wanna throw at them.  Even "awful". Queen takes your accusation of "awful" and bakes a sex pie out of it and feeds a slice to your fine-ass babysitter.

I can't think of the last time I consciously chose to listen to Queen. Maybe a dash through "under pressure" when that Michael Gira/Xiu Xiu version came out just to compare, but before that was probably around 1980-1 when my friend picked Queen The Game, Billy Joel's Glass Houses and AC/DC Back in Black when his dad could only find 9 he wanted out of the 12 albums you got for a penny from Columbia House and for us, then, there were no other songs we needed that weren't contained on those three.  I know we played "Another One Bites The Dust" backwards until we heard "It's fun to smoke marijuana." like you are supposed to hear.

His dad had a big reel-to-reel set up in the living room of their house on which he mostly listened to Kenny Rogers but one night to mentioned with a wink that he had another set up in their bedroom with a "lovin' tape" already strung through it.