My subject also clocked a guy with a guitar. 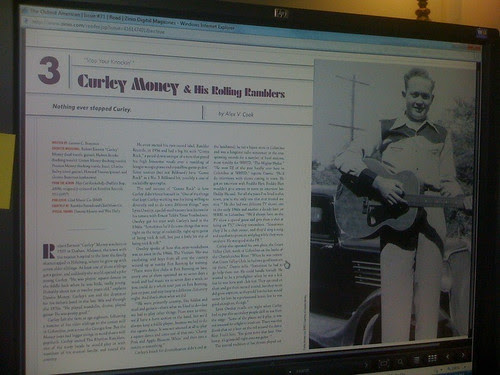 My story in the e-OA.

The Budos Band, I and III
Felt, Felt

Not the Felt, the pefectly English Felt, the greatest cult jangle pop band in existence Felt, but a different Felt from psychedlic Alabama circa 1971. I've seen this album when perusing the discographies of my Felt and assumed it was from the alterna-hip-hop Felt or some other Felt. The real Felt did only 10 albums and 10 singles and then burned out like a match. This Felt was hipped to me from OA editor Marc Smirnoff's excited note opening the 12th Annual Oxford American music issue which his stands like right now.

Note: neither this Felt nor any other appears in the issue, though more Alabama weirdness than your pea-brain can hold does.

I have a digital subscription through Zinio, which you may consider. Love this magazine, one of the all-time greats and I'd do this kind of arm-twisting even if I was not included in it.

But I am! It's my fourth consecutive Music Issue appearance - I understand at the fifth consecutive appearance, the ghost of Tennessee Ernie Ford is summoned to record your voicemail message -  and joining the subject pantheon of Daniel Johnston, the Residents and Andre Williams is Alabama-born rockabilly polymath Curley Money, who once during a fundraiser for a soldier he felt was wrongly accused of murder for something that happened in Vietnam, played a show in a car dealership parking lot over the spot where another guy was buried alive for two weeks. It's complicated, like the truth always is. My subject also clocked a guy with a guitar. It might be the most action-packed story I've ever written!


Curley Money & His Rolling Ramblers, "Stop Your Knockin'". Here's my favorite kind of video about the very song and artist I covered.

Some noted non-slouches of music writing like Greil Marcus and Ben Greenman and Richie Unterberger and Carl Wilson also appear with articles in this issue, enriched also with an essay from my friend Jamey Hatley on how to get over your childish aversion to the blues. Ghost-walk thee to your newsstand and get it!