I lean toward "yes" 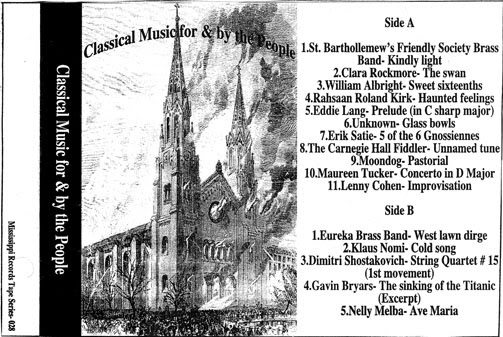 Hugh Cornwell - Hooverdam (available free from his website) Last week, I listened to the Stranglers for the first time in probably 17 years, and poof, in the e-mail arrives a congenial rocker from their singer Hugh Cromwell. No orders are being made for nubiles to be brought forth, but there is plenty of the old grinning belligerent boogie that was one of the Stranglers' best assets (second to the keyboards.) It actually sounds not unlike what a Robyn Hitchcock album would sound like if Robyn Hitchcock made sense. Retaining the Strangler's type-face is a classy way to tie it to the past without getting too arch about it.

Delightful Nightmare - Hugh Co...
British Sea Power - Man of Aran (listen) I prefer this wilier, airier instrumental-ier version of British Sea Power to the bounce-it-off-the-walls-of-the-arena-of-my-dreams rawk exhibited on their gangbusters album of last year Do You Like Rock Music? It's a question I ask myself a lot, and I don't know that I have a definitive answer. I lean toward "yes" without dickering over the specific terms. But I can say that when it comes out like this album, yes I do, very much.

The South Sound - British Sea ...
Dan Deacon - Broomst (listen) I think I'm just getting around to this, or maybe just now coming around to it, but I like it. Something about Dan Deacon stuck in my craw where I couldn't open myself up to it, but now I can't imagine what that issue would have been. My problem with the current pop minimalists are that they are unwilling up the real challenge of the style; instead of submitting to the ardor of Seeing The Patterns Thru, they use it as a roller to cover the room in quick wide strokes. Deacon, on the other hand, is not in the least bit afraid to kick into Philip Glass hyperdrive, and neither am I.

Build Voice - Dan Deacon
Dirty Projectors - Bitte Orca (listen) I think I've finally zeroed in on what I think about this and the Grizzly Bear album and will be putting that grand statement together shortly, until then, I invite you to bask in the complex charms of...

Classical Music By and For the People, a most splendid mixtape of art music curiosities from the fine minds at ROOT BLOG.
Posted by Alex V Cook at 6/22/2009 01:13:00 PM