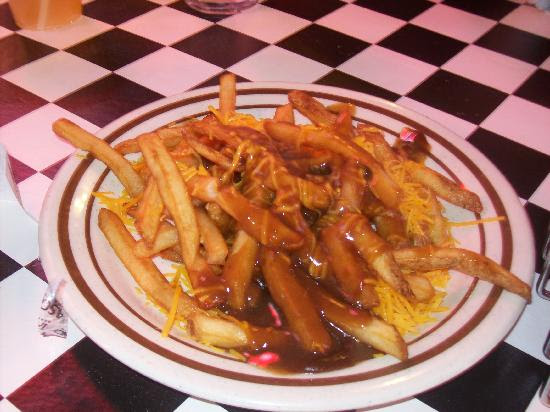 We gave the Baton Rouge branch of New Orleans' Acme Oyster House a shot last night. I was hoping to sample the new Abita Satsuma Harvest Wit before committing to a six-pack, but to no avail. They did, however have one of the first local sightings of boo fries - cheese fries slathered in brown gravy, better known in the regular parts of the world as poutine. I have been starving for this seemingly easy but elusive appetizer since February 6, 2007 when my friend Lori took me and the world on a poutine tour of Los Angeles. That is a long wait for an appetizer.

I suppose one could make this relatively simple dish at home, but it seems more the kind of thing you would eat out, idiomatically speaking. It's like making a shrimp po-boy at home; I'm sure it would be good and fresh and tailored to your specific needs, but it would be just a little wrong. Acme's boo-tine was salt-licious and bar-magic but truthfully, given the Southern acuity toward fried delights, they could have kicked out the jams a little. Mix in some of John Folse's goat cheese of which he is so proud. Make a roux gravy and brag about it. Work some chaurice or andouille up in there. Jalapenos. Toss in some fried crawfish tails to drive the only-here point home. In short, rock that shit. There is no valor in holding back when you are talking cheese fries with gravy. Push this greasy envelope and I will sing your praises and direct hungry, drunken people to your door.

I don't want to be too harsh on Acme. A testament to the quality of its version of the dish will be that we ate all of it before I could think to snap a picture. The above snapshot was ganked from Tripadvisor.com.
Posted by Alex V Cook at 6/16/2009 08:22:00 AM