[The Record Crate] On Being Well-Equipped 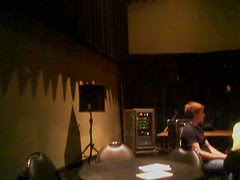 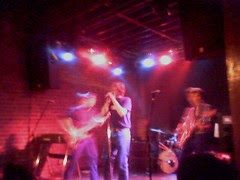 Cinema for the Ears, The Fleshtones

Last Wednesday, I caught two concerts at the opposite ends of the technology spectrum that both hearken back to my favorite cultural advancements of the 1960s. First, the LSU School of Music and Laboratory for Creative Arts and Technology put on a great show with their state-of-the-art 27-channel ICAST sound system -- cutting-edge composition with cutting-edge technology. The pieces all worked around the idea of combining sound and audio space, projecting from all points of the room. Some of the pieces like John Young's "Sju," Ron Herrema's "oN a LaRk" and Leigh Landy's "Oh lá la radio" took apart the human voice and reassembled it to exploit its extra-linguistic qualities, often to humorous effect while Simon Emmerson's "Frictions" and Simon Atkinson's "Nocturne" focused on crafting slowly evolving soundscapes.

The salon atmosphere and the sounds created reminded me of photos of concerts maverick composers John Cage and Karlheinz Stockhausen staged in the 1960s, when electronic music was in its infancy. Two pieces that pushed the technology in new directions were Stephen Beck's playful "A Little Light Sabre Rattling," where a performer with a Wiimote replicated light sabre sounds based on his movements, and Rick Nance's "Gravity's," which used sound sources from his experience as a rock climber to create an unsettling but palpable sonic narrative.

Walking into the garage roar of The Fleshtones could not have been more different. Armed with some basic rock gear, impeccable showmanship and 30 years of great songs under their belt, they demonstrated how rock'n'roll is intended to be done. When they were on the stage, they swiveled and shook like the teenagers they were 30 years ago, but for much of the show, the band leapt into the crowd, onto the bars, handing off their instruments to people in the crowd and forcing the audience into the action. The Fleshtones did more than play their songs; they put on a show, made the music come shockingly alive. Combined, the evening gave me great hope people are still willing to go to great lengths not only to make their art, but to bring listeners into it.

This week, if you want to see what one can really do with just an acoustic guitar, check out David Tanenbaum at the Manship Theatre on Thursday. The classical guitarist is considered by many critics to be one of the world's finest, with a repertoire ranging from tangos to the most demanding modern composers.