[outsideleft] The Serenity to Accept The Black Keys I Cannot Change

In the interest of giving you a glimpse behind the critical curtain, This is the process I go through when a band I love for the things they embody, the processes they employ and the greater implications their work might have embark on fucking all three of these things up.

Denial – I heard about the Keys backing up Ike Turner with Danger Mouse at the helm and I thought, Good gig, ya know. Sure, it will suck - has anyone listened to an Ike Turner record produced in the last 30 years? I bet they can get the van fixed, hit a couple more pawn shops on the road, change out the grease in the chicken fryer that lies at the soul of The Black Keys. I mean, were I, their biggest fan on the planet, consulted, I’d say swap Ike for Tina and Danger Mouse for Jim Dickinson and you would have the best record ever, but we all get busy. 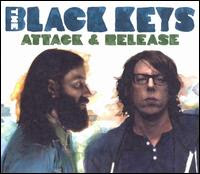 Then when Ike went to rock ‘n’ roll Valhalla to start his 999 year stint of getting his ass beat every day, I figured this was all a hazy mediocre idea that would pass like a well-intentioned meal, and they would plug in their amp, and drag out the drum kit and rock the shit out. I mean, they are the only ones left…

Anger – What fucking genius decided, you know what we should do on “All You Ever Wanted?” We should reduce Dan Auerbach’s glorious guitar just after shocks: the click of reverb, stock vibrato shudders and wash it out in soupy church organs? Did you read the wrong name on the clipboard and thought you were working on a Counting Crows record? I could see that, because fucking with the formula like you did reveals a complete unfamiliarity about what makes rock music stripped to the core a beautiful thing. I’d offer to kick this person in the nuts, but the bloodless eunuch behind all of this is immune from these attacks.

Email ThisBlogThis!Share to TwitterShare to FacebookShare to Pinterest
Labels: outsideleft, the black keys