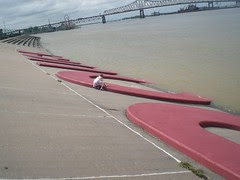 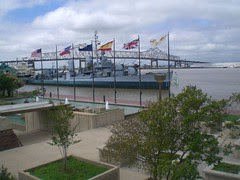 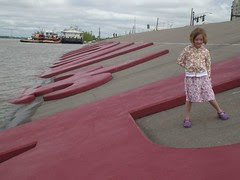 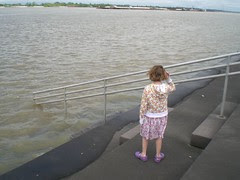 The Mississippi River is nearing floodstage, which makes for an ominous De Chiricoid scene on the levee downtown. To offer some perspective, the USS Kidd depicted in the top right photo is actually up on pilings and you can normally walk right up to it. The concrete steps usually terminate before a good 10-20 yards of grass and rocks before the river appears. Those letters spell out "BATON ROUGE" with a fleur-de-lis in the middle, set to be spied by planes and passing barges, or just to needlessly remind Port Allen of our looming presence. 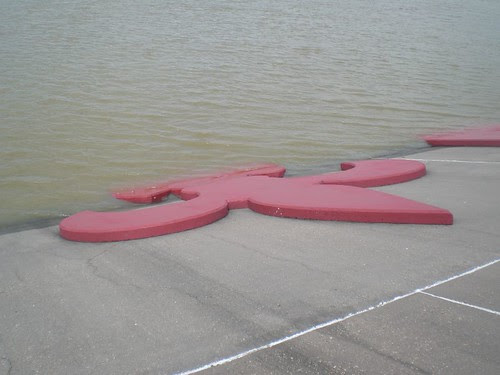 While we are in no imminent threat of flooding (so we are told) seeing a giant fleur-de-lis slowly being devoured by the concrete-colored river seems to be such a obvious sobering omen of what happened in New Orleans that you feel like you should be worried, at least to some degree.

And also, considering that millions of years of erosion have created this river not to irrigate a continent nor to create a means for nation building, but to serve primarily as a flimsy metaphor for my own state of mind, I am approaching floodstage with the scattered things I am involved in, but like the concrete steps that are populated twice a year for fireworks, I feel like I'm keeping the murky water in its place.