I was ready to pen a return-to-form monstrosity about this record that would likely tell you nothing, so I held back and let this record instead work its way into my day to day, listen to snippets in the car, at the store, on the way to the club. I wouldn’t do this for every slab of plastic that comes through the mail slot; it’s just that I care about what Nick Cave does. In a predicament that I suspect plagues Bob Dylan fans from way back, Nick Cave’s early records filled a noticeable gap in the continuum, but over the years we diehards have had to endure his phases and costume changes, each time telling ourselves, “He’s still got the stuff,” while wishing he’d just somehow manage to do another Highway 61 Revisted/Tender Prey. 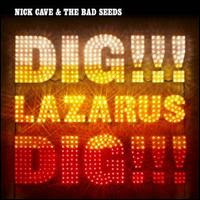 But they never do, do they? I sometimes envy the dimwitted knights of Creationism because evolution is usually disappointing in a human frame. You cannot expect an artist to retain the momentum after 30 years; it’s even unreasonable to expect that thread that stretches back to the good old days to avoid dry rot. And yet, here we are, unable to let go of the past. I get a notice everyday – The Feelies are reuniting! The B-52’s are hittin’ the mall! It’s a matter of time before some mouth-watering marketer informs me in breathless punctuation that Kajagoogoo is answering our prayers and reforming. Is it because music now is so uninspired and shallow that we are stoked when anyone with a modicum of perspective enters our airspace? Nah, rock music has always been uninspired and shallow, its one of its greatest charms.