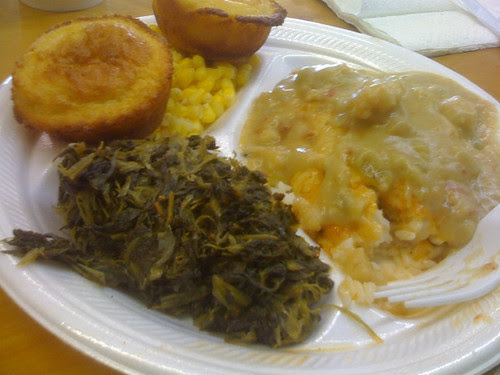 Catfish Lafayette at Zeeland's. I like to think I get two cornbreads because I am a big shot.

Media Announcements: After that lunch, all I have is media announcements, but I have a lot of them. I forgot to link to this thing I wrote about Shooter Jennings for OffBeat, who played in New Orleans a couple nights ago. I'm right now writing a thing about Justin Townes Earle and trying to not have the same thing to say.

Also, Richard Buckner, profiled in panting adoration by yours truly in Country Roads recently, is playing at the Shaw Center, downtown baton Rouge tonight, and I'd love for alla y'all to come because he really is that good.

Also, noted author Jack Pendarvis is on a multi-socially-networked mission to bring back Bronk, the detective show created by Carroll O'Connor starring Jack Palance, and I support this. Watch as Bronk sees the facets of himself playing out in the chambers of his gun.

The only way that intro could be better if Bronk had been a Quinn Martin Production, but I guess the lack of a narrator lends Bronk some mystery. I just wish my life's every incedent was introduced by Hank Simms, the Quinn Martin intro guy, Hank Simms. Imaging getting out of bed, flinging open the drapes with Hank Simms  and having Hank Simms declaring today's episode of your life to be "A Tangle of Vipers" or "An Admirer's Conundrum?" Anyone remember Banyon? Cannon?


Not a QM Production, but I watched Ironside religiously at my grandma's; she had a thing from Raymond Burr left over from his Perry Mason days, and I think she appreciated his characters growing feeble with her.

I could go on, but I've never heard American Music Club dude Mark Eitzel's 2002 version of "Move On Up" before and he rocks it in his particular two steps forward, three steps back into the quicksand kind of way and it closes this rambling mess out nicely. Vote Bronk and vote often.