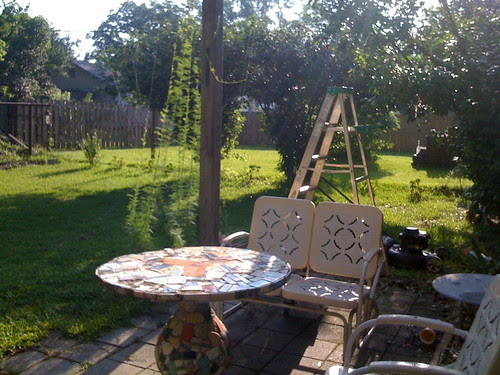 Our neighbors John Michael and Chris graciously gave us this tiled concrete patio table before moving and man, it makes the patio. Also notice how the climbing cypress branched out to colonize the extra line I strung up just yesterday afternoon. I no longer cluck my tongue in dislike the latest Black Keys album now that there's a new latest record that better channels their R&B ambitions better than Danger "Just make it sound like an old record and call it a day" Mouse did. It's no Thickfreakness but it'll do.

This one is a keeper.

♫ The Black Keys, "Never Gonna Give You Up" (Rhapsody)

I've always wanted to do a folk-up of "Rainbow in the Dark" even before Ronnie James Dio's departure from this plane, but until I do, Damien Jurado holds down the smoldering, infernal fort with "Holy Diver" up on his MySpace. Folk covers of metal songs are easy wins but they hit the nail with Thor's hammer. Once I saw Austineers Matt the Electrician and Southpaw Jones tear the house down at the Red Dragon in Baton Rouge with a genius take on Danzig's "Mother." I can't find it, but here is a song by them about metal song moments that I like a lot.

You can bid on the marimba the White Stripes used on Get Behind Me Satan here, to benefit the Nashville flood victims.
Posted by Alex V Cook at 5/19/2010 09:09:00 AM