trading crippled introspection for a cosmology 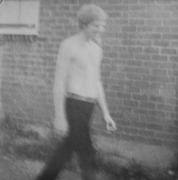 Somehow, I've never gotten around to listening to Planet Waves before. I love the lazy gospel-folk smear of the music, that roll-out of bed-onto-the-floor-into-work-back-for-dinner drowsy lope of it - perhaps it informed the informality of Neil Young's Tonight's the Night. The vocals - and keep in mind, we are talking about Bob Dylan - sound forced. Of course they are; everything about Bob Dylan is forced, which is why it either comes out centrifuged and clarified or emulsified and mushed once it runs through his precisely calibrated filter masquerading as a prospector's pan.

But there is a bit of the caterwaul here and there, which I have always thought his strongest vocal point. Bellowing "Forever Young" into the crowd hoping someone will get the message.
He's a great practitioner of art informel, the term French critic Michel Tapie came up to describe the abstract painting of Wols and Jean Farutrier, who reduced their images to stains and smears, crusty boils festering on the canvas, cysts remaining from letting life filter through gessoed linen. Dylan can stain a song like nobody's business. The piano and guitar and drums rattle along like normal but somehow his all-wrong holler resets the situation, and the song bends around it, contorting to make it all fit - like either a mother cradling a child or a Venus fly trap closing the jaws on its prey, I'm not sure which.

A friend recently asked me for recommendations about Jandek, and if you think Bob Dylan is contentiously in possession of genius, then Jandek is a crap shoot. A few of his albums feature an unnamed guitarist who can "play" while many of his records consist of a near depraved abandonment of convention. I like the ones that fall in the middle best, like Blue Corpse - the songs are simplistic blues strums of a few chords with our boy crooning the best he can (with a little reverb on the assist) and comes to that gap between the song and songcraft that Dylan does from the other direction. This album, one of his more pastoral, is among my favorites - the economy here is palatial, broad strokes subbing in for intricacy, monotone for melodiousness, crippled introspection for a cosmology. Blue Corpse is Pink Moon for a darker night.

The music nerd in me finds perverse pleasure in segueing something as polished and smooth as John Martyn after a Jandek record, but I swear it matches up. Both contain a lunar logic of shadows and rustles in the trees, a libidinousness that sidesteps patterns. Not that Martyn isn't a great musician - Solid Air has the cobbled feel of a Van Morrison record without the showboating, fleeting emotions kept in a tight cage. Jandek's records will make you feel like you can really play guitar, while Martyn's will make you throw your six-string in the hopefully nearby roaring fireplace.

But all these quandaries of form and formlessness, racket and song, rules and breaking them, stillness vs. the beehive of life are neatly resolved in the deep recesses of Pharaoh Sanders' Black Unity -- four hundred tears of suffering, two thousand years of salvation, and 13 billion years of cosmic swirling since that first blast from Gabriel's horn in The Creator's quintet -- is neatly collapsed in this thirty-seven minute treatise on unity.

And Burial, the recently unmasked dubstep/grime/dubiously-distinct-genre dude that is currently the toast of England? I have no threads to weave or grand statements to make except that I dig this record. I won't a week from now probably, didn't a week ago, but right now it is pop music of the future is now... no, now...no, now... of the highest water.