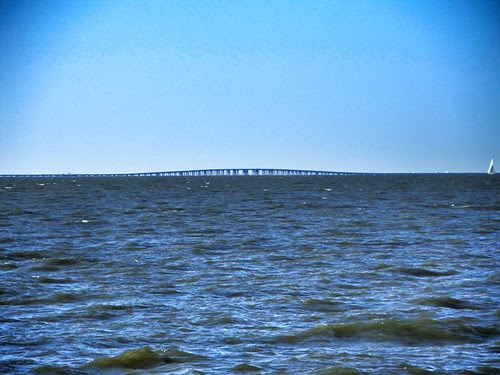 The endless Causeway stretching across the endless Lake Ponchatrain.

The Who, Endless Wire and Who's Next
Wreckless Eric & Amy Rigby, Two-Way Family Favorites
Black Dice, "Pinball Wizard" (purely coincidental, came across in the emails)

I have Wreckless Eric & Amy Rigby's cover of the Who's "Endless Wire" and then the Who's version stuck in my head, orbiting fiery around other like hungry dying stars.


The cover version is from their Two-Way Family Favorites album from last year; the original, the title track from the Who's 2006 problematic but gloriously so comeback record. Among the problems: Rog does a Muppety Tom Waits impression (redundant?) on "In the Ether".  But, It has those Who's Next twinkling lights keyboards throughout the album, which saves it for me. Details don't matter; the Who are not beholden to modern man's criteria for greatness, for they are the "who" to whom we believe we abstractly compare ourselves.

Eric & Amy settle into a rocking chair rhythm and how they creak "endless, endless" is a balm soothing temporality's itchy rash. "He gathered wire and angels/to entertain immortals" is epic enough a pompous sentiment to accompany a court beheading scene in Game of Thrones or something wonderful like that.

O, but the Who! I like "Fragments of Fragments" even better than "Fragments". There is a case to be made that Pete Townsend is the greatest minimalist composer, maybe up there with James Brown.


Anyway, the Wreckless Eric & Amy Rigby album trades the Who's clouds of flaming neutrinos and system-crashing solar flares for two guitars and harmonies and its why it's the thing. They do some great stuff with "Fernando" if you want to track the album down.