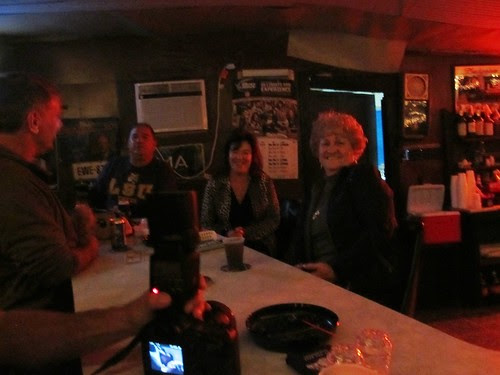 Last night, I went out and partied with these folks at the Rainbow Inn in Pierre Part, LA. The Rainbow Inn appears in a Country Roads piece this coming February and on page 121 of my book this coming March. The people from Swamp People hang out there all the time; Miss Cora (right) says she even got a speaking part this season.

Swamp pop legend Don Rich plays a regular gig there every Thursday, but is taking a break until March.

Hey! Louisiana Saturday Night tumbled up on the @LSUNews tumblr!

If that seems like a string of gibberish typos to you, it means LSU made an announcement about my book on one of their new sites.  It is a humbling thing to have a respected press and subsequent giant parent organization help promote one's book. Thanks, LSU!

Louisiana Saturday Night (published by LSU Press) should be in stores early March (You can pre-order, I think) and this site will be partially, if not, significantly conscripted in the book's promotion. If any of you out there are media folks/book reviewers/book store owners/book festival organizers/people who like to fly authors out and put them up in luxury accommodations so they can talk about their own obsessive interests, please hit me up! The publicity machine is in gear.

I got the new year off to a perfect late start by listing my favorite records of 2011 in this week's Record Crate blog for 225. Also this week in Baton Rouge: Rough 7, the Tipitina's Co-Op benefit and get your tickets for Fred Eaglesmith.

The savvy self-publicist would post some Louisiana music to coincide with these announcements, but the following is the path I am currently walking. Or clogging. Or doing the hully gully to, or something. Whatever it is, it's party time.

Edited to add:  I've never heard of the Montesas before today but I love these guys!