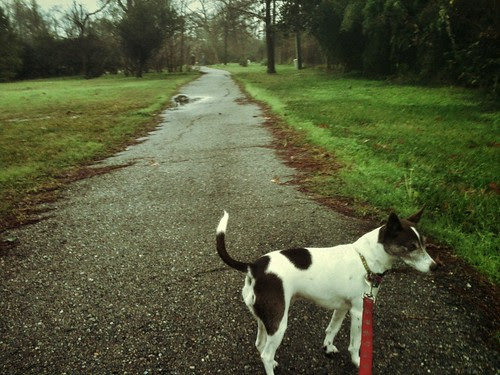 Book publicity is aswing! The one definite thing is the book launch party at Teddy's Juke Joint on March 10th. You said you'd come! I'll remind you!

I had a dream that Sukie, the very dog you see above, was the size of a horse and just standing at the foot of the bed in the dark staring at us.

I also had a dream that I was involved in the building of the Eiffel Tower, and there was some deal with the timesheet, where you had to list every hour that work was being done on the tower, not just the hours you worked. Basically the timesheet would say you worked 16-20 hours a day, six days a week, covering the different crews. The supervisor explained this was a violation of French labor laws but was how it had to work, and that when the labor law inspector inevitably comes around, tell him that I worked all those hours, and he'll tick it off on his little list and that would be the end of it.

The Known World is so good. It's Cormac McCarthy spare, rambly, harrowing without the gauze of privilege lending the narrator a means to disbelieve that things are as bad as they are.   The people in the Known World are cautiously surprised the world isn't worse, or pragmatically try not to think about it.

Somehow I'd yet to hear Steve Reich's Three Tales before, or this little wonder as well.