Maybe y'all all knew this Harry Nilsson tidbit: both Mama Cass and Keith Moon died four years apart in the same room in his London apartment. From Wikipedia:

Nilsson's 1970s London flat in the building at 12 Curzon Street on the edge of Mayfair, was a two-bedroom apartment decorated by the design company that ex-Beatle Ringo Starr and Robin Cruikshank owned at that time. Nilsson cumulatively spent several years at the flat, which was located near Apple Records, the Playboy Club, Tramps disco and the homes of friends and business associates. Nilsson's work and interests took him to the U.S. for extended periods, and while he was away he lent his place to numerous musician friends. During one of his absences, ex-Mamas and Papas singer Cass Elliot and a few members of her tour group stayed at the flat while she performed solo at the London Palladium, headlining with her Torch Songs and "Don't Call Me Mama Anymore." Following a strenuous performance with encores, Elliot returned to the flat to relax and sleep and was discovered in one of the bedrooms, dead of heart failure, on July 29, 1974.[1]

On September 7, 1978, The Who's drummer Keith Moon returned to the same room in the flat after a night out, and died from an overdose of chlormethiazole, a prescribed anti-alcohol drug.[1] Nilsson, distraught over another friend's death in his flat, and having little need for the property, sold it to Moon's bandmate Pete Townshend and consolidated his life in Los Angeles.

Here is the Google Street View. (Address provided by the Shady Old Lady of Old London)

Interior photo ganked from Another Nickel in the Machine. Click to delve further into Swinging, NSFW London. 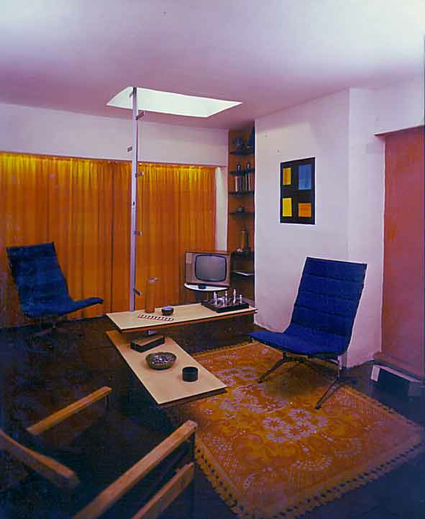