my luck's like a button and I can't stop pushing it 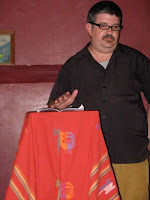 My reading this past Saturday at Perk's went great. Thanks to Andrea Neighbors, Ben, Maureen and the others who shared their wonderful work, and James for putting this on. I've never really pursued readings because I thought my stuff wouldn't translate well, but I suppose it does, so the ego has presented yet another itch to be scratched.

Saturday opened with a record bout of tailgating, so much so that I suffered sausage poisoning and could not see fit to work my camera. There was the reading and a party in which The Hold Steady's Boys and Girls in America (listen) figured heavily, as it should at parties among the young

and the evening ended with a loud guitars and drums at a practice space down at the end of a long stinky hallway. There was a band rehashing "Sweet Child 'O Mine" in the adjacent bar and we passed them both physically and metaphorically.

The "Simple Symphony" worked well, flinging cheeriness and strong simple emotional thrust into that mess, and "Spiegel im Speigel" slowly eked out trying to be heard among the din.

The kitchen was cleaned to

The Flaming Lips' Embryonic (listen) to which I am warming to with each listen. I think that first song is knife-point on it.

Convinced Of The Hex - The Fla...
and then the afternoon was lazily spent along the the second evolution of ska into effervescent breathy English pop, culminating in my correctly predicting that my daughter would share in my affection for General Public's one song "Tenderness"

Is your love like a button? You can't stop pushing it? I say that is what buttons are for, and I think Dave Wakeling and his crazy eyes agree. It is all mapped out in Ranking Roger's dye job should you need further incentive to keep pushing on.
Posted by Alex V Cook at 11/16/2009 09:58:00 AM