[The Record Crate] Why I Love Drive-By Truckers 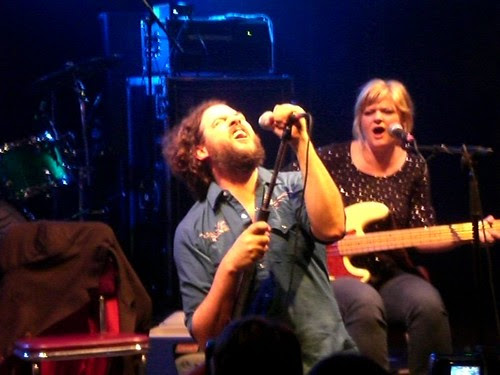 There many reasons I consider Drive-By Truckers to be the best band in operation. They write songs depicting life with staggering sorrow and slipshod hilarity woven together like the nylon strips of a cheap lawnchair: strong enough to hold you up, but still with enough frayed edges to remind you that you can fall right through if you get too comfortable.

They write songs that can be gently whispered, like they were on their acoustic tour last year, as well as shot from the top of multi Les Paul volcano like the other times I’ve seen them.

They write songs, period. There is a short list of current bands that have something to actually say that I enjoy the way they say it, and Drive-By Truckers is at the top of that list.

They get the idea that one’s background is a tool and not a destiny. They take southern rock and 1980s college rock and arena rock and drunken AM-radio country and treat them as launch pads for their art rather than Jell-O molds for their songs.

They took a hit losing Jason Isbell and instead of imploding, they dug in deep and crafted Brighter than Creation’s Dark, maybe the finest record in their career.

Patterson Hood tells some of the most honest stories in current rock: not necessarily tales of degradation and death (he has those, too) but ones of everyday working-class struggle, with all the sadness and humor intact. Shonna Tucker stepped up with a brace of amber-glow country numbers that would make a hit for any daft country diva if country audiences were interested in good songs anymore. Mike Cooley deserves praise for being able to pack more hilarity and syllables than any drunk twangy couplet is rated to hold.

I could go on. I love this band. Any excuse you have for not seeing them at The Varsity on Monday night, yes, even it being a Monday night, is foolishness and is best kept to yourself.

Elsewhere in the week, Quebecois rock combo Sunset Rubdown washes in to lap the floodwall of the Spanish Moon stage with wave after wave of intricately crafted passionate art. UK phenoms The Kooks, a band that has been described as The Kinks to Arctic Monkey’s early Beatles. I don’t know about all that, but their most recent album Konk is another example of finely wrought English rock, swagger being channeled through brilliant hooks rather than tabloid banter.

And OK, rock ’n’ roll may not be your “thing.” You are grown folks now and don’t want to fight your way to the bar and have your head ring for days. You want to take in a night that instead is about taste and class. The Listening Room, a free venture (sponsored by the Arts Council) is featuring world-renowned jazz practitioner Wess Anderson and The Thelonius Monk Institute Septet at the Lyceum Dean on Third Street. I went to the Terrence Blanchard show last month and can testify that The Listening Room is one of the classiest music events to rock this blue-jeans, blues-listening town. Reservations are highly recommended for either the 7 p.m. or 9 pm show. Call 344-8558 to reserve your table.