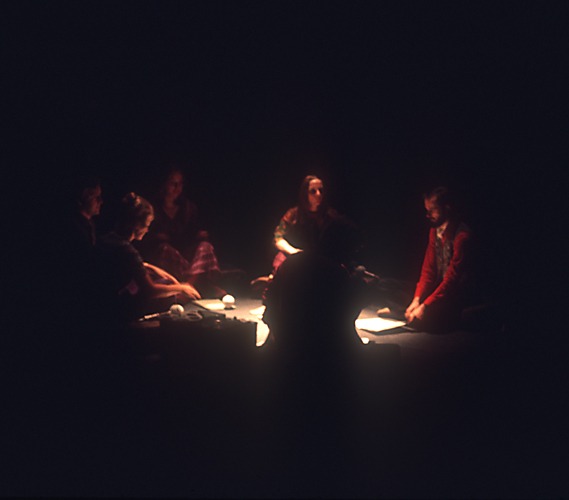 Brainticket - Voyage (listen) According to AMG, this isn't the good Brainticket album, that being the un-immediately-available Cottonwoodhill, so supposedly second-rate, late-sixties, German, exploratory soundscapes will have to do, as they always do.

Karlheinz Stockhausen - Stimmung (Copenhagen version) - I'm listening to this yet again with even fresher ears. I put it on while walking the dog and with the whir and hum of precise vocalizing integrating with tree frogs and crickets and the little tinkle of the dog's collar and whoosh - it all made sense. I gave it another listen walking to the library against the crickets of the day and it worked again. This piece is an encyclopedia of tuning, a reference where you can find the particular sonic state of anything, flipping through permutations as an optometrist does with that weird machine full of lenses. I'm coming to see Stockhausen as one of those minds that is too smart, is unable to play well with others, and approaches the beauty of the universe from the top, from that place where everything is accounted for and the Olympians just set the crystals right so that they may beam the light of creation through them to form the stuff of the mortal plane.

Or maybe any group of people humming sounds good with crickets. It sounds good with the noise of discs being imported into iTunes as well, which is good, since it has set me on a Stockhausen kick about which you will be hearing in the coming weeks.
Posted by Alex V Cook at 8/03/2009 11:42:00 AM