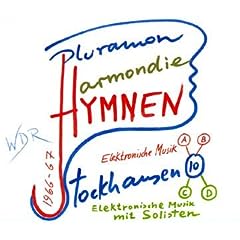 Karlheinz Stockhausen - Hymnen - This massive but diffuse piece has been my default listening all week, like the music that gives a film its flow, but doesn't make it to the soundtrack album. The idea behind this piece, I think, is taking national anthems and irradiating them into shortwave static and electromagnetic hums, so that some sort of continuum arrives, an idea not dissimilar to that of Yukinori Yanagi's "World Flag Ant Farm" where ants carry colored sand from one flag to the next until the idea of nations becomes erased.

You get a sense of the original songs, especially "La Marseillaise" bleeding through the sound, just as you do the flags as they carry colored sand throughout the world, but while the conceptual layer of World Flag Ant Farm is immediately apparent, that of Hymnen is relatively obscure. Sonically, the piece comes off a little like someone slowly playing with an AM radio dial at night; nothing really to listen to, but the phenomena is weirdly alluring.

I thought at first that maybe Yanagi is more concerned with the message coming from the structure, while Stockhausen is merely using the structure as something upon which to hang his ideals, but the more I listened, Stockhausen's take on the melting pot is the more realistic one. Cross pollination and cultural assimilation is not the jolly industrious endeavor that the ants offer; it is strange, insidious, hard to know it is happening. Stockhausen has a strong interest in cultural power dynamics and how they can be related to art - see his unfortunately timed and misunderstood comments about the World Trade Center attacks - and this is what I believe to be at play at the heart of Hymnen.
Posted by Alex V Cook at 8/07/2009 11:16:00 AM