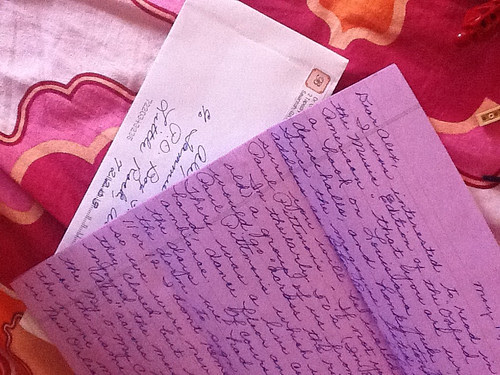 Today I received a letter from a reader, forwarded to me from a magazine. Not trying to be too precious about it, but (to me, anyway) this just doesn't happen, or hasn't until now. I don't even know how much stamps are anymore.

The Beatles, Abbey Road
David Eggers, What is the What

And you know what is a good book? What is the What is what. The epic scope and carefully played dialect of the Sudanese "lost boy" narrator is predictably a punch to the gut, but the structural aspects, the frames within frames within frames, framing the undepicatible horrors in such piercing detail is stunning. I'd been less than completely convinced of Mr. Eggers' staggering genius up until this point but now I believe. You could say I am one that believes. What's the word I'm looking for? Whatever it is, I can't wait to read Zeitoun now.

I'm reading What via Overdrive from the East Baton Rouge Parish Library, the circuitous means by which one checks out eBooks. The reader app is not the Swiss clock that is Kindle, it doesn't even play around with leaf-flippy page transitions but then it's not a book. It's something else that contains what a book also contains.

Plus, it expands what I like about libraries, not that they necessarily work well, or how you think they should work, but simply that they do work. They got a system. I've been thinking a lot about digital means - the justification for getting this here device on which I'm laboriously pecking out the HTML since Blogger's rich text editor is Flash which doesn't work on the iPad. It's a snake failing to get a good bite on its own tail, looking for a different means for self-digestion. I've been thinking I should write a book about that, which is the kind of thing one does when one has a real, right there book to finish.

You know what is a good album? Abbey Road is what. It has everything, even a song I kinda hate. ("I Want You") I like when an album I love has a song I hate. It's a bit of grit around which forms a pearl.