Pour, Drip, Splash, and The Things We Know You For

I was flipping through Art in America and was struck dumb by an ad for Larry Poons' "Throw, Pour, Drip, Spill, and Splash Paintings: 1977-1980"show at the Jacobson Howard Gallery (See the review and slideshow at New York Magazine) 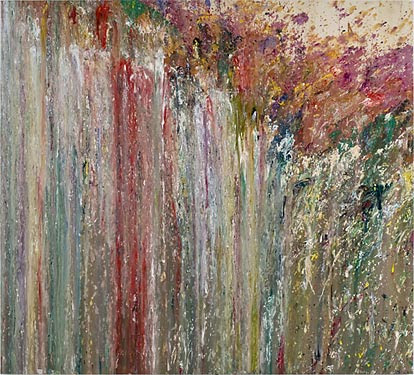 He's one of those guys that I know as a geometric abstractionist from the 60's, a guy that would fill a vast monchrome canvas with a somewhat logical array of identical dots, quivering and humming in optical contrasts to the background (and, with some interpretaive license taken, in the turbulent times in which they were crafted) and here was this luminous cascading waterfall of silver and candy clolors. The tense control I associated with him seemed to give way to cheery abandon. I thought at first it was a new painting by Cy Twombly, whose haphazard scribbling style 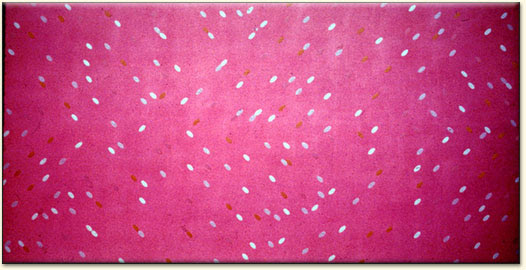 gradually turned into graceful quasi-landscapes like this. Poons made his mark by making dots, and it seems a betrayal of the Thing We Know You For to move in this direction.

Consider, though, he did that pink painting in the 60's and the waterfall in 1975 and has moved on to even more floral terrain in his most recent work. Over the course of 40 some-odd years, a guy should change things up, evolve and yet we cling to The Thing. If I was trying to explain who Larry Poons is to you, I wouldn't say they guy that's gradually taken his work through lyrical progressions, I'd say "the dot guy from the 60's" just as if someone was asking who Paul McCartney was, I wouldn't start with Wings or 20 years of dopey solo records.

When considering an artist, its an important thing to resist The Thing, if that artist is (arguably) fortunate enough to have one, to consider the work at hand. Plenty of people coast on the momentum of great art crafted long ago, with the current work often seen through the rose-colored glasses of the former. And, why shouldn't they? Should they continue what they are doing even though it lies off the path they previously beat? Shouldn't an artist reap the spoils of success and do whatever the hell they want? Shouldn't they do that regardless of success? Of course they should. The onus is on us to judge the current work on it's own merits, and not on the scrapbook of memories of what came before it. Only then are we really talking about art and not our corny forced nostalgia about it.

That said, what is up with Cy Twombly's recent work? The down side of leaving my critical backpack at the desk is wanting some more epic-scale, cosmological, ecstatic scribbling about the Punic wars and Rilke and discovering that he's all about fluffy clouds now.