Outsideleft: Bon Iver, Over the Breakup and Through the Woods 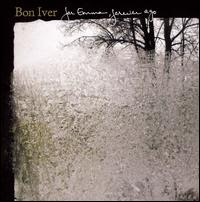 Postmodernism describes our current state of living in that it doesn’t describe much. No perceivable hierarchy, quick easy interbreeding among the animals now freed from their hierarchical pens, all the offspring of those couplings developing a homogenous patina – acting, looking, smelling, becoming the same. It’s a little depressing actually; it implies there are no more heroes and thereby no more heroic gestures to be made. It makes the image of a giant cultural machine eating from tubes into which it itself on the other end.
Fortunately, the organic mess of life has little time for theory and instead seeks scratches for the itches and lately, there has been an itch for something melodious and organic (but not too organic) infecting the masses. The scratcher has taken on many a post-folk form, from the fishtank burble of Brightblack Morning Light to the soft gallop of Iron & Wine to the lock-groove Kundalini patter with which Panda Bear charmed everyone last year. Generally, I am for it; it picks and chooses from the finest portions of a million things: Brian Wilson’s harmonies, Arlo Guthrie’s ramble, Stevie Wonder’s sense of sound, and produces something from it that is joyous enough in its own amalgamation that dissecting it for its origins becomes a fruitless, boring activity. It is music that dares to be pleasing.
Bon Iver is the latest player in this game, flowing in on a soft breeze that blows the scorecards out of the spectators’ hands. For Emma, Forever Ago is, at first whisper, a quiet, unassuming, lovely record. Justin Vernon is the baker of this confection that is Bon Iver (purposefully misspelled French for “good writer”.) The word has it is he holed up in a Wisconsin cabin with an axe for firewood, a freshly dissolved relationship for inspiration, a guitar and a portable studio for the music-making, and this record bears traces of it. The harmonies are built of choirs of Vernon’s earthy falsetto, hanging on to the skeletal guitar figures like leaves suspended by spiderwebs.
Like the landscape in the woods, things get intricate on For Emma, Forever Ago when you move in for a closer look. “For Emma” has a horn section that sounds like a far-off loon, “Lump Sum” starts with an almost Gregorian duplicity of the voice easing into a rather spritely folk melody. This album has texture down pat, but nowadays, any yahoo with a laptop can build up afghans of sound as deep as they want. What fundamentally makes this stick out is the songs that emerge after some focused inspection. Read more...
Posted by Alex V Cook at 2/27/2008 03:26:00 PM