Outsideleft: Up on The F*cking Block with Xiu Xiu 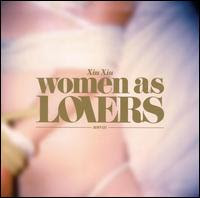 It was fast clean work after that – no tears, no love business, no promise me this and that. Put me on the fucking block and fuck! that’s what she was asking for. I went at it with cold blooded-fury.

That very sentence was the removal of the keystone on that relationship. No dull ties to girlfriends and the like, no passion reined in by weak unmeant and unkept promises. The nakedness of that line was as embarrassing as being actually naked, but when you are naked, it’s more honest than when you’re not.

Jamie Stewart of Xiu Xiu has a similar honest nudity to his songs as Henry Miller, but instead of imbedding them in a rush of words , they are ensconced in a beguiling mixture of electro-pop sheen and Chinese opera klunk. Women as Lovers comes on the heels of some of his more accessible efforts, and while it’s not the exposed nerve plugged into Pro Tools that was A Promise, it’s a wild, sometimes harrowing, sometimes funny, skid across the fucking block.