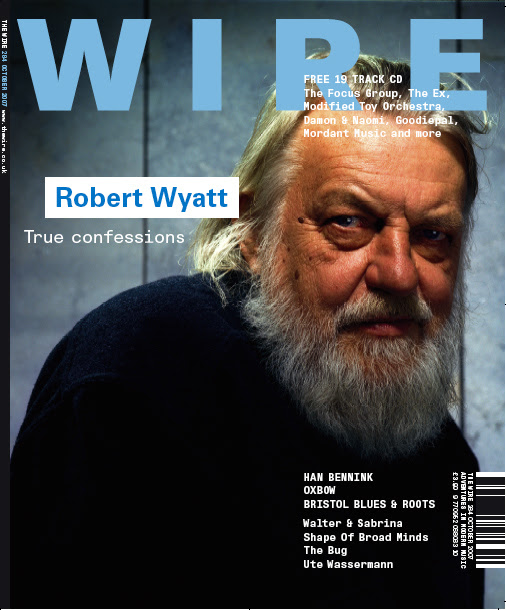 The onset of autumn is the perfect time to go on a Robert Wyatt kick, since his vocals are as fragile as withered leaves and yet as resolute as an oak about to stand naked in the cold. I reviewed his excellent epitaph-but-he-ain't-dead-yet Comicopera recently and then read the brilliant cover story interview of Wyatt and his wife Alfie by David Toop in the October issue of The Wire, so it appears the cosmos is with me in this regard.

Toop's interview is one of the better piece of music journalism I've read this year - he injects himself directly in the dialogue, basically retelling his day in the country with the recover alcoholic Wyatt and his supportive but far from long-suffering wife and songwriting partner Alfie. It is as revealing as one can get without being either gossipy or idolatrous, and Toop definitely loves his subject, plugging in poetry like

You like a thick sound, I say, a kind of wheezing wall to wall, portative organ meets harmonium meets earth to sky privet hedge seething with bees.

I have been a long time fan of Wyatt's solo work ever since my friend Philip discovered this startling gap in my musical knowledge and sent me a mix tape as a corrective, but I have never delved into his more notorious first group Soft Machine before. Soft Machine is synonymous with The Canterbury Scene that begat the collosi of overwrought music: Yes and Pink Floyd.

I am long over my undergrad Pink Floyd phase and have cautiously avoided a Yes phase, only because I've witnessed numerous innocent people never fully recovering from theirs, and while I often look up at trees with a vertiginous fear that they shall topple over on me, I never fail to be fascinated by its roots.

Allmusic guide gives Third a checkmark and a train of stars, so why not start there. The opening live track is a dense and unfocused collision of cat-on-the-keyboard organ and din, but the rest is a beguiling English-cool take on the rock-jazz that was in the air in 1970, noodling along on a postcard Albion walking trail, kicking the melody like a can down a lane. Delightful stuff to walk back from the post office through the crisp, suddenly-chilly haze too.

If Sun Ra was from Sheffield instead of Philadelphia, if The Allman Brothers were in line to create New Wave instead of Southern Rock, if Milton Babbitt had spilled bongwater all over his meticulous charts- Third, like Wyatt's own albums, is singular, accessible, weird and beguiling. All this may unveil the difficult truth that I am afraid to face my apparent love of prog rock, and will wind up delirious on a message board somewhere, nattering on about jean-Luc Ponty and Frank Zappa to a mirror populated with fellow lost souls, but I can't avoid the road before me because of the fear that it might lead to Hell.
Posted by Alex V Cook at 11/06/2007 08:58:00 AM