There are so many wondrous things in the Ogden Museum of Southern Art but among my favorite pieces are these windows looking on New Orleans' warehouse district plus the view of old lonely General Lee from the roof terrace.

Friday afternoon, I went down to New Orleans with colleagues and students for a meeting and some world famous fried chicken at Willie Mae's. The chicken is even better than you think it might be. To our credit, we managed to have a meaningful after-the-meeting meeting over such a bounty. I like these people.

This group is working on a year-long project about the Times-Picayune and this little trip was about gaining perspective on a place with which we all believe we are familiar. Also, it was an elaborate scheme  to take a bunch of people to a chicken place I've always wanted to go to, to see if my perspective lines up with other people's. My whole career is such a scheme. It is like sighting a rifle; you keep shooting until your crosshairs lines up with where the bullet falls.

The Ogden was after the after-the-meeting meeting. By the way, Tav Falco is showing some of his films at the Ogden on Oct. 4, 2012 and then performing with the Unstoppable Panther Burns there on Oct. 5. You should go. 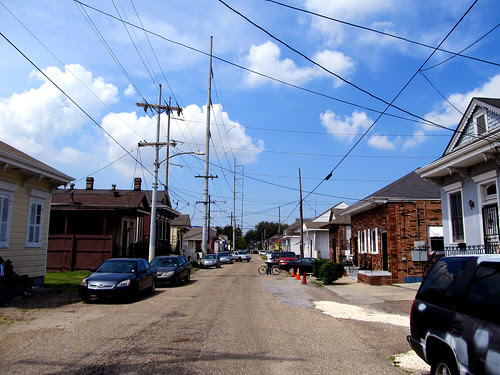 The street outside Willie Mae's

And now I am in the writing-about-it phase of the trip, the project, the chicken and everything, and the perspective is skewed. The lines cross and the vanishing points are never where you think they should be. The bullets could hit anywhere. Those windows at the Ogden work like that, completing a museum's mission of framing a world in the context of a single thing so that something universal can emerge.

It's like Satie's world of familiar wonder in his Furniture Music; how the melody is subdued and repeated and processed so that life can go on above, whether in dissonance, in counterpoint or just by singing along.  Excessive platitude generation is the warning light for procrastination, so I'm going to get to work now.