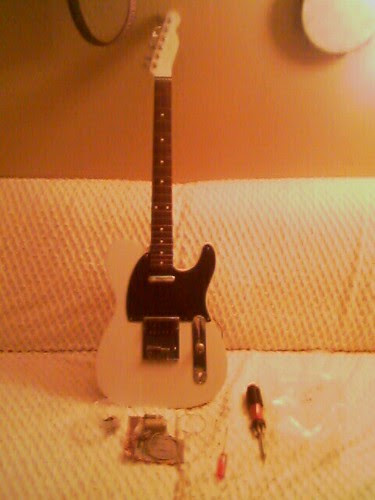 I traded some old distortion pedals I never used to a musician in town for a box of parts that add up to most of a guitar. I started harvesting parts off my old Sqiuer strat to make up the missing components, resulting in my ownership of two non-operational guitars instead of one operational one, but it's fun anyway. Maya has been helping me turn the screws and run the strings through the holes and whatnot, and I think I'm going to let her decorate it when we are all done. I will most likely have the finest, glitter-encrusted, paint-pen decorated, mutant Kingdom Hearts-themed fake Telecaster ever!

He to pick it up from him at work, which I thought was in this weird triangular building with a stark white 6-floor atrium carved out of the middle, fountains, and these completely uncomfortable yet groovy chairs in the lobby. 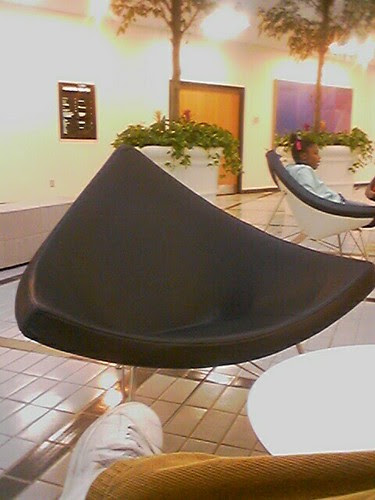 I used to work in an office in this building for this software company. It was one of those jobs where I worked ridiculous hours for a couple months at a stretch. When I approached the front door, I remembered pacing outside of it one night at 3am, smoking four cigarettes in succession, about to cry. There is a cool little bridge over a creek that runs next to it, and I would sit over there on my lunch break and play guitar and watch snakes and turtles go by. Once I saw a small alligator in there. I did this painting of it back when I was going through my folk-art phase. 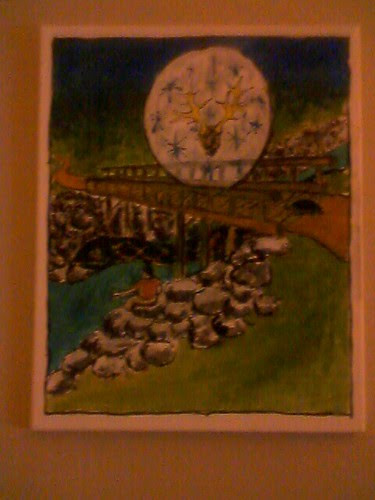 I learned to play mandolin under the parasol of this large willow tree behind the building. It was precious, precious times.

I waited for a long time for him to come down and saw the one remaining guy that used to work at that office with me. My firing from there was a blessing, in that the place was quickly vacated after me, but I was getting a sinking feeling just sitting in the lobby, like all of my self-doubt was swirling in a conic vortex, emanating from up on the 5th floor. I called the musician again and ascertained that I was indeed in the wrong building (in every sense of the word) and left my psychic globule of self-loathing on a fake Danish Modern egg chair to throb away without me.
Posted by Alex V Cook at 1/25/2008 07:54:00 PM