THE DEVIL CONTROLS HER BY RADAR!

Well? He does. This is the poster Kroger Babb used to promote the version of Ingmar Bergman's SUMMER WITH MONIKA that he bought and recut for the grindhouse circuit. Bergman was famous for his depictions of existential crisis; Babb, for "sex education" moves. Here is Babb's trailer. 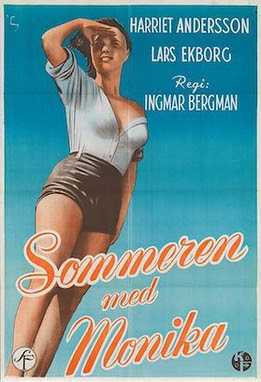 This is the poster for Bergman's version. The film made waves with Harriet Andersson (then romantically tied to the director) cavorting naked on the rocks of a Swedish island while the young couple in the poster escape dreary Stockholm for a season. Escape from your very own dreary Stockholm and watch the whole thing here.

One suspects it was that wicked Scandivaian free-spiritedness controlling her, as opposed to the devil's radar beams, though now I want to see that movie. Bergman wasn't afraid to let the devil pop in now and again.

Things do not pan out so well for our young couple as they often do not in Bergman films, but for a moment, you think the whole world might just go on groovy forever. The devil probably controls that with his radar as well. Thanks, devil.