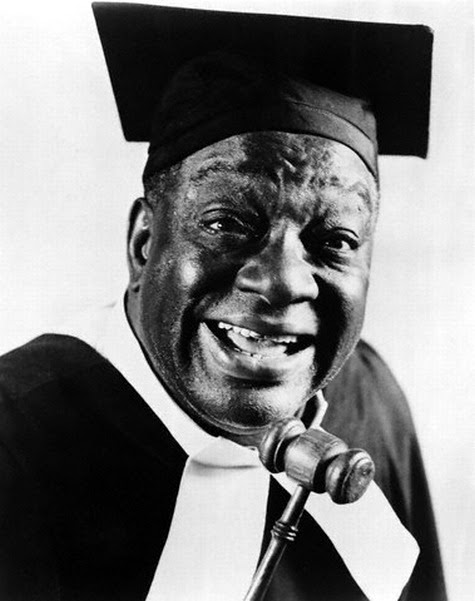 Pigmeat Markham was better known for his "Here Comes the Judge" comedy routine which became a meme in the sixties. He performed at the Apollo Theatre (sometimes appearing in blackface long past the age of Vaudeville), on The Ed Sullivan Show and in race films. His popularity finally transcended the chitlin circuit when Sammy Davis, Jr. performed Markham's routine on "Laugh-In" and wove "here comes the judge" into the wider cultural fabric.

The success of Davis's appearance led to Markham's opportunity to perform his signature Judge character during his one season on Rowan & Martin's Laugh-In.[7] Archie Campbelllater adapted Markham's routine, performing as "Justus O'Peace," on the country version of Laugh-In, Hee Haw, which borrowed heavily from the minstrel show tradition.

Pigmeat Terry was one of many singers who were "[b]iographical ciphers emerged from their anonymous dark, made 78 rpm recordings, and were promptly swallowed up by darkness again" according to the description John Fahey's  Revenant label gave them.  AMERICAN PRIMITIVE V. 2 was Fahey's final curatorial effort for the label her started, and it comtained this song, haunted by Pigmeat Terry's otherworldly voice.

All I know about Pigmeat Pete is that it was a psuedonym used by Harry McDaniels, as told by Eugene Cadbourne's biography of Wesley "Catjuice Charlie" Wilson on Allmusic.com.


The origins of the name Catjuice Charlie are unknown, but speculation is certainly encouraged. Pigmeat Pete's real name was Harry McDaniels. Wesley Wilson played both organ and piano and was extremely active as a songwriter with his wife, their most famous creation being the demanding anthem "Gimme a Pigfoot," a song strongly associated with classic blues queen Bessie Smith.

Pigmeat Pete Smith was a latter-day English blues performer seduced by the blues of all the pigmeat singers that came before him. Adam Blake has a touching tribute on his blog.

The last time I saw him play was at a festival where Errol and the Blues Vibe were booked to play on the main stage. Pete was doing a solo set on the acoustic stage. Errol, Richard Rhoden and I went along to watch. Pete unfolded his tunes, told his stories like the masterful raconteur that he was, revealing once again his love and devotion to the memory of Max Miller and then, at the end of the set, launching into a fast one-chord boogie shuffle at a tempo so punishing that Errol, Richard and I glanced at each other with trepidation: “he’ll never be able to keep that up”, was the unspoken comment between us. Well Pete kept it up, and sang himself hoarse, and left the stage to tumultuous applause. And we applauded and whistled and shouted right along with them because Pete’s rhythm was safe, safe as houses.

Pigmeat Jarrett. The info posted on this video says more than I could about this Cincinnatti bluesman:

He could change keys in the middle of a song - he was not a musician - he was music.