Persona, and a eulogy for Google Reader 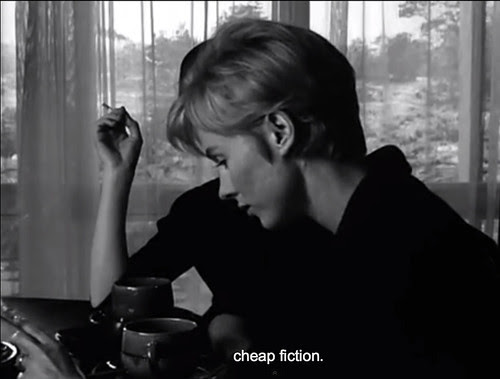 
The Internet, y'all. I love that you can just up and watch a classic nervous breakdown any time you want.

Just as the great painters love a landscape or a bank of flowers, the great filmmakers love the wrinkles of sheets and the billowing of clouds the sun-dappling of ripples and how a face and a person and a life  is just a thing you linger on to justify shooting reels of sheets and clouds and ponds.

From the Wikipedia entry:


Bergman wrote Persona during nine weeks while recovering from pneumonia.[2] During filming Bergman wanted to call the film A Bit of Cinematography. His producer suggested something more accessible and the title of the film was changed.[3]


Persona is a work of architecture first, a ductwork and scaffolding of lives arranged in a peculiar way to achieve stark beauty. It's a literal one-person dialogue for  most of the film, a mirror into which one wants to cast a cement block just to disrupt the maddening one way reflection, the devastating blow the ego to realize the mirror isn't looking back.

What I didn't get were the weird little experimental stunts.

Don't get me wrong; I love experimental film stunts, but for a film fraught with stillness in every sense, these kinds of things are really puzzling. There is plenty of mediation/meditation through media: reading books aloud, watching footage of the Vietnamese monks self-immolating themselves on a hospital TV. The gist is that there is a beloved actress who suddenly stops talking, and she is being cared for by a nurse who cannot stop. They go to a summer house where feelings get hurt just like if they were talking to each other.

Isn't that how Echo, the woodland nymph of the myth, bit it? Zeus needed her to stop talking about herself so he could dominate the conversation like a damn God, so he doomed her to only repeat others. Kinda what happened to the Internet, actually.

If you know any code, the echo command in PHP, the language in which most interactive pages are written, is the one that actually makes things appear on the page. Nothing happens without an echo.

Once, the Internet was the domain of kooks ("When you point finger, three finger point back at self," said my old Tai Chi instructor). that needed that endless broadcast, needed to never stop talking to no one and now it is social. What you put out doesn't exist unless it is repeated.

I was going to write a eulogy for Google Reader, but it is the death of an entity no one knows. None of my media savvy students know what an RSS feed is, or what subscribing to a website is (was). With subscriptions, you didn't have to be friends with people or follow them or encircle or anything, you just signed up for their subscription. It was presented in whatever context the author intended.

This has given way to the social share, the endless cocktail party of social media. I like cocktail parties, and can manage to keep talking about myself through the best (and worst) of them, so I'll make it fine, but I cannot help but think about the voices that just want to be heard as they are. I got into this wanting to be one and wanting to hear the others.

I don't know how to tie this back to Persona, so I won't try. I'll just let this tangent be a puzzling, momentary break in the film, a place where the devil appears for just a second and then we get back to the business of sharing our nervous breakdowns.
Posted by Alex V Cook at 4/12/2013 10:56:00 PM