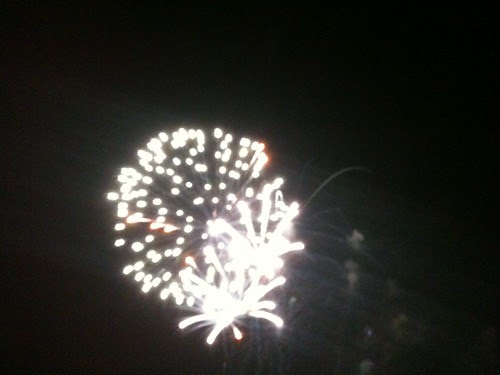 We went to see the Christmas lights get turned on downtown and suddenly it sounded like the parking garage was under siege. Fireworks! We scrambled to the roof to watch them explode up close and personal. The best part was how the boom echoed off the surrounding buildings, each blast dissipating into what Maya and her friend accurately described as "a robot's fart".

I heard Incredible String Band on KLSU last night piloting the darkness one must brave to come home from Teddy's and it reminded me what having a late-night college radio show is about. I wanted to ring up DJ FML and request Pearls Before Swine but she was doing fine on her own, plus, driving. I took DJ FML's lead and let the merry pranksters soundtrack the Albertson's. It was degrees less jarring than the kid screaming NOOOOO over the anonymous R&B holiday Muzak.

Last night at Teddy's, my buddy Clarke and I were nursing a Jack and Coke setup in a back corner booth as Larry Garner was interspersing extended, encyclopedic blues/funk workouts with stories about how integration put him in contact with hippie girls and LSD. Teddy has a million blinking, shimmering competitors for one's attention going on in the place. Clarke asked if I could see the band where I was sitting and I said that I could see that one flat screen recasting the stage like a personal size Jumbotron. He was quick to point out that it was playing actually a DVD of a different show recorded there.

I said this level of stimulus, of congenial mayhem was about as awesome as it could get, when suddenly Teddy's wife appeared passing around a tray of cupcakes.

For instance, wrap your brain around Granny dancing with Mr. Peyton who was sporting an electric mohawk for the evening. I'm not sure how old either are exactly, but they are up there. Larry, performing in the background, who himself is almost 60, said Mr. Peyton was the neighborhood barber when he was a kid.

I put both of these things on Facebook and wondered whether it is even worth blogging further, which is the most precious wonder one can transmit. But it all is precious. Facebook is like taking core samples to see what might have lived down in the ice; the long form is strapping on mukluks and consorting with the Emperor penguins.


Piece of John Fahey's "Song" from Of Rivers and Religion

It's what late night radio shows are for - the extended traipse through a thing that interested you, to give it more than a fleeting glance. No one is listening, or rather if they are, they are along for the ride, so you can go where you truly must. The DJ went from the Incredibles' alchemist lair to the Kingston Trio and the Mamas and the Papas and on through familiar ground, which works too. No matter how flat the world seems, there are still valleys and peaks and chasms in which to stare. Or massive explosions, staged for nothing more than to make fart noises in their passing.

PS: William Bowers once killed me in an anecdote he wrote for the Oxford American, saying he was left standing there like "a blinking, farting robot" - one of many things that guy wrote that left me in a similar state. Whatever happened to that guy?

You need to read his "All We Read Are Freaks" if you haven't, which I had in my head was all about Jane Austen, which would tie this up nicely, but it's about Emily Dickinson. Close enough.