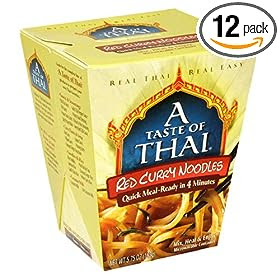 For: A Taste of Thai Red Curry Noodles
I am a sucker for the complex alchemy of a multi-packaged microwaved meal. For a paltry sum, separate packets of precise noodles that looked like they were wrapped for astronauts for whom the rigors of space travel manifest into terrifying OCD, a pleasingly disturbing sachet of red sauce, mysterious "powder" and a small cellophane square of what appears to be finely powdered weed are put in the self-same box and transmogrified by cooking techniques stemming back to radar technology into a steamy broth and adequate noodles.

Sure, the plasticine sheen of the noodles makes it difficult for the weakened but flavorful milky elixir to cling in any semblance of the usual sauce-noodle relationship, and you are confronted with the slightly embarrassing option of drinking warm curry-milk from the carton, but it was satisfying for its price range, cooked in the time stated, and allowed me a moment of mild exoticism on my workday.

Against : A Taste of India Masala Rice and Lentils 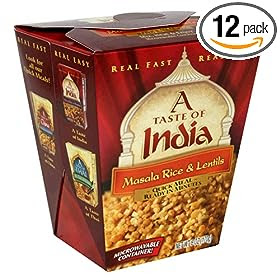 As I unceremoniously dumped the packets of instant rice, resembling the shells of newly hatched bole weevils and the congealed sauce into the cardboard tureen, a coworker idled up and asked "What ya got there?" and I responding that what I likely had was a Beckettian farce of a meal, played out in a brace of equally uneventful heatings resolving into precisely the same results as when I started, only slightly warmed over.

After the second act on the theatre-in-the-round that is a work microwave at lunchtime, I pulled it from the stage and fished around the murk with a plastic fork, wondering if I was to suddenly witness the ascension of slop to food. "Is it done?" my coworker asked. "Perhaps it has to metasticize," I responded. I chose to follow the unwritten fifth step on the package: drop the entire carton onto the trash and hike over to the union for a Chik-Fil-A sandwich, so in that regard, it was a relatively satisfying lunch. Perhaps if they had moved the fifth step to the first, it would have saved me a lot of trouble.
Posted by Alex V Cook at 6/10/2008 02:21:00 PM