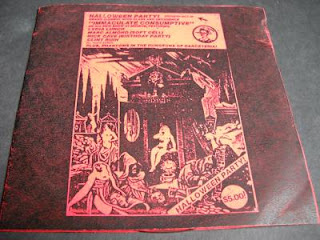 Lydia Lunch/Marc Almond/Clint Ruin/Nick Cave - Immaculate Consumptive (via Mutant Sounds) I say all that about living breezily in the now just as the glorious melodrama of past favorites comes radiating through the wires this morning. Man, I loved the art-sleaze-rock of the early 80's, maybe because it dovetailed with my own hormonal awakenings, but finding these records was like that time I found a copy of Velvet magazine in my backyard, apparently tossed over the fence in a panic by one of the teenage boys next door attempting to escape one of their frequent and routine beatings. As it happens, a Lydia Lunch pictorial was in that very issue, and between salacious pictures of her sprawled under a card table, was some text about her bands Teenage Jesus and the Jerks (listen) and 8-Eyed Spy (listen) which I tucked away for later. I felt a strange bravado years later pulling her The Queen of Siam record off the shelf at the college radio station, thinking Everyone else here learned about her from Sonic Youth; I learned about her from pornography.

This is also where I first heard about Brian Eno, mentioned as the producer of the Teenage Jesus & The Jerks album. Lydia Lunch famously said of her early champion:

Eno's records are an expression of mediocrity, because all it is is just something that flows and weaves, flows and weaves . . . it's kind of nauseating. It's like drinking a glass of water. It means nothing, but it's very smooth going down. (here)

I tucked Eno's name away for later as well.

Among the many disappointments of the digital age is the absence of the older Marc Almond albums from the usual coffers, particularly the Marc Almond and the Willing Sinners and the Marc and the Mambas records. They were so torchy and delicious. Fortunately some traces of it persist on YouTube.

Clint Ruin, for those that don't know, is one of the many project mantles of JG Thirwell (others include his exquisitely damnable Foetus band names like Scraping Foetus Off The Wheel and You've Got Foetus On Your Breath) who is now better known for the providing the soundtrack for the exploded Johnny Quest parody, The Venture Brothers.

Lydia Lunch & Clint Ruin - Stinkfist (listen) The culmination of Lunch and Ruin's professional relationship, and in many ways a pinnacle of both their sonic catalogs, was the short but brutal Stinkfist EP. I always thought Thirwell got right the techno-brutality so many artists attempted back then - he imbued it with cartoon violence without once cracking a smile. Lydia Lunch was great at making you uncomfortable while you stared.