the most adorable teenage rebellion band ever 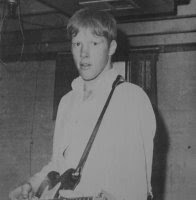 Jandek - Follow Your Footsteps - Jandek is "if all else fails" music, if I writhe away from everything else, this is where I turn. I have to say I'm less enrapt with him after his disappointing performance in New Orleans a while back. Before that show, I figured, here is a guy that is not doing it for any other reason than the doing it, and well, I'm not so sure, and I guess it doesn't really matter. I still really like his music in those moments when I am tuned to like it, especially this album at this moment. This is brittle folk rock on the other edge of crumbling, already disintegrating by the time it gets to you, falling apart in your hands and blowing off.

Moe Tucker - I Spent a Week there the Other Night (listen) I dig this disheveled solo thing from the Velvet Underground drummer. I won't say I love it, but I dig it all the way. Super sweet thrashy trashy garage rock from possibly an actual garage. The whole Underground appears on this record, if not together but on separate tracks, never recapturing the magic or anything, but having a hoot. She should do an album with Calvin Johnson of Beat Happening, if she hasn't already, and let that record have babies who grow up to form the most adorable teenage rebellion band ever.

Blue, All The Way To Canada - ...
Yoko Ono - Approximately Infinite Universe - This would be a case of an album I love more than I dig. Yoko is projected over the light funk and trashy rock of this record in a cheery awkward and totally brave way. It is naked to the point of discomfort and not a little maudlin, but I am way into it lately. I was walking the dog last night wishing she'd at least have had better lyrics to work with on this song, but what else did I want her to say? She is, from all the way back in1973, addressing the fact that people (to this day) think her to be a cruel chicky baby and she (also to this day) wants me to join her revolution, whether I dig it or not. What else do I need her to say?

Vic Chesnutt - Ghetto Bells (listen) Picking a favorite Vic Chesnutt album it like pointing me to the grocery store and asking my favorite food. I dunno, sometimes I like watermelon, sometimes I like Pop Tarts. This album falls at the midpoint between watermelon and Pop Tarts without coming off in any way like a watermelon Pop Tart. "Vesuvius" on that record is non-stop genius from "logic squeezed out like mustard on a corn dog" to "Christian charity is a lace doily on my death boner" and beyond.