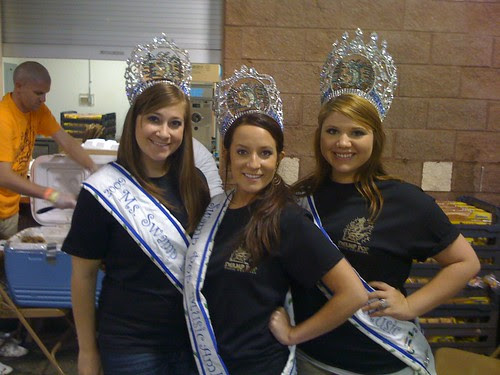 Swamp Pop Music Queens, past and current, at the jambalaya booth.

Loading up to Flickr a metric squillion pictures from the weekend, I noticed they range from 480K to 818K in size. Why? They are all taken with exactly the same iPhone camera. (Ed to add: I figured someone would know. See comments, and thanks, Dave.)

Most of these pictures were snapped at the Swamp Pop Music Festival in nearby Gonzales, about which I will have more to say in this week's 225 blog, but here's a taste. Ladies and gentlemen, Mr. Warren Storm.

I love the temerity of swamp pop more than I love swamp pop itself. My general theory is that there is little separating it from oldies/variety music besides the concerted embrace of a particular community, and that is enough to make it a thing. Fast forward to the end just to see how many people were out there swaying to the oldies under that giant mirror ball in the 4-H hall.

Warren Storm makes me want to trim down the sides of my mustache and invest heavily in hair care products. I don't think you get a glimpse of his shiny white bucks in this video, but it's kind of like how that one mortal woman was disintegrated when she spied Zeus in his godly form. I plan to interview him for my book and I hope it happens while he takes me shirt shopping at the big and tall menswear store of my dreams. Speaking of the book, I got an extension on the deadline (it was two weeks from now) so we proceed with less anxiety, more action.

I maintain, contrarian as this sounds, that I like everything about M.I.A. except for her music. This new album of hers is a little more abstract and less a dancefloor deconstruction, which I like, but I'm still not finding a foothold with it. It is possible that I am just being stubborn about it. As she states in the title of track 8, it iz what it iz.
Posted by Alex V Cook at 7/19/2010 08:16:00 AM