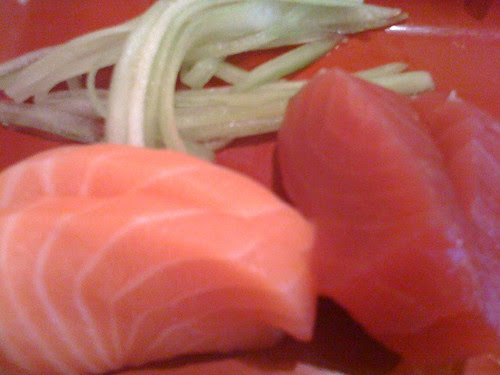 I thought it said "Fela" in the credits of this short film about his new album; Tony was Fela's drummer and music director for decades, but with Fela being dead and all, I feared this was a Natalie Cole from-the-vaults situation. Turns out it was Flea. Debating....

I would have taken a photo of the Medusoid mass that is Koi's seaweed salad but I ate it all before I got my camera out, so there is the sashimi from my bento box lunch.

My friend and I were talking about the iPad over said lunch, how we both want one but don't really. I think when Apple figures out the shiny new way they will do multi-tasking then this thing will make more sense. I am full on with the iPhone internet experience - I rarely touch my laptop at home except when I have to do something besides whittle my life off with social networking. I've tried doing this blog from the iPhone and with all the cutting and pasting that goes on between Flickr and lala and YouTube and how none of the iPhone flavors of those sites are keen to expose the embed/link codes, it's kinda impossible to do.

What I think would be cool is to integrate eye tracking with the camera, which the iPad doesn't have, and voice recognition so you could have a seamless interface between what's on the screen and what's on my head. I can double-blink shit and move things around with my mind. It will turn the computer screen into the real Magic Mirror we want it to be.

Here is how the Dragon Dictation iPhone app interpreted the above paragraph: But I would like to see is some integration my site tracking from the camera which the iPad doesn't have and voice recognition she could actually have a seamless interface between what's on the screen and watching my. Either it cut short, or perhaps, unlike me, it knows when to stop.