better iPods made from shredded dreams 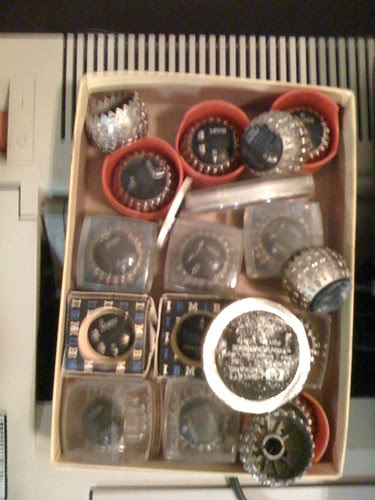 I started reading Andrei Codrescu's The Posthuman Dada Guide: Tzara & Lenin Play Chess which touches on a lot of the things re: my relationship to this here thing and others.

Memoirs and history further dismember the past by articulating it: every articulated experience is as good as forgotten.

Hm. I sort of know Andrei, have certainly known plenty of people that know him well. He is a big deal around these parts. I would occasionally hear that same vampire accent at the coffee shop or the bar that I heard on his NPR stories. He (or someone on the editorial staff for his long narrow literary journal Exquisite Corpse) wisely ignored an enthusiastic but naive paper I wrote on Artaud one hot undergraduate summer.

I thumbed through a gorgeous new (2008 anyway) Dada compenidum at the library; all that scrap paper and scattered typography rendered in vivid reproduction. I bet that stuff looks better in the book than it does in real life.

I also listened to "Debaser" on a my way to the grocery store. Salvador Dali, whose film Un chien andalou the song is about, was neither official Dadaist nor surrealist though I think his practices at times better expressed the sentiments of both movements than the sanctioned cheerleaders ever did. Dali understood the dismemberment of meaning; you didn't attempt to solve the human mystery with conjecture and wit; you did it with a sharp knife and a rolling camera.

Andrei talks about how

Dada is the Western now, a Zen that employs fullness instead of emptiness, so much fullness, in fact, that there isn't enough matter to fill its fullness, so it resorts to imagination in order to create even more paradisaical objets, better iPods made from shredded dreams.

That hits home, or at least a chord. I like fullness, this blog is about expressing a fullness. It is an iPod of shredded hours if not dreams.

The above photo is a Dada-rific (or at least Joseph Cornell-tastic) box of discarded IBM Selectric type-balls in the pile outside my office and I thought about taking it into my sanctum, but instead I took a picture, because even fullness can get too full of its parts looking back at you and you are driven to start slicin' up eyeballs, oh ho ho ho!