The Real Truth of Lou Reed I'll be your mirror (in this case, in the remains of Westmoreland shopping center)

Back in 2007, Thom Robinson wrote a great article in Perfect Sound Forever about Lou Reed's neglected albums, and back a day or two ago Alex Rawls, the editor at OffBeat, tweeted: "Annoyed. Listening to "Coney Island Baby" on Rhapsody & had bonus songs after the album ended. I hate that! When were bonus tracks bonuses?" and though I don't categorically agree - that anomaly tacked onto No Depression had me firmly in its spell the other day, more than the beloved album proper - but, for real, what album ends better than Coney Island Baby? That repeated remuneration "I wanna play football for the coach"  culminating in repeating "the glory of love might see you through." like a wave forming out at the horizon crashing on the soft rock shore of the Coney Island of Lou Reed's mind, sending it out for himself and his keeper Rachel "and all the kids at P.S  192 and capping it off with "Man, I swear I'd give it all up for you." Boom. 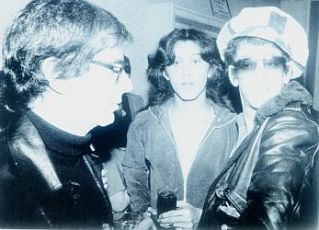 Andy, Rachel, and Lou, from here.

I was thinking about this while watching my brain race itself to sleep last night and thought I need to listen to Rock 'n' Roll Heart, one of the few Lou Reed albums I've never listened to, one so neglected that even Thom Robinson passed it over. So here I am. Allmusic has it as Mr. Reed's second worst, right after Metal machine Music which dominates its own discussion threads decades later, and anyway I don't know about all that. Set the Twilight Reeling is pretty bad. There are traces (tracks) of Berlin in it, particularly "You Wear It So Well", the hyperkinetic jazz-infused boogie that gives the problematic classic Street Hassle some its musicle. I'm particularly digging the Afrobeat-up on the bluesy Velvets cast-off "Follow the Leader." The Lou Reed in my mind would say he invented Afrobeat and that Fela lifted it off him, and then the Robert Christgau of my mind would show up out of nowhere, like Marshall McLuhan does in Annie Hall, to tell us how we all got it all wrong, and we skulk away duly lectured, and now I'm thinking how sad it is that my mind is populated with Lou Reeds and Robert Christagus.


Here is the version of "Follow the Leader" Robert Quine heard in 1969.

But so, Rock 'n' Roll Heart is about 2 parts awesome Lou Reed patina, 3 parts saggy Lou Reed hubris, and I suppose we all are when we substitute ourselves for our Lou Reeds, and should be happy that anything comes through at all, ever, which I think is The Real Truth of Lou Reed, no matter which one we are talking about.