The sky and trees and a car star as "pink lightning"

Media Announcement: 27-channel sound systems, minimalists against cancer, Caribou and Guy Clark are featured in this week's Record Crate for 225.

I am being inundated this morning with things I had and people I know. 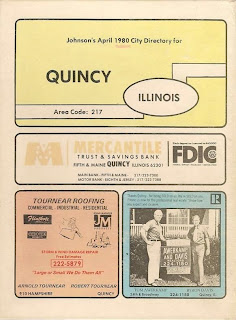 Like this from here via this. I am pretty sure we had a copy of this very phonebook around the house in 1980. We lived in Carthage, IL., in an apartment only a few blocks from the jail where Mormon Church founder Joseph Smith was shot. Quincy was the nearest big town, and my mom would take us on occasion to Ming's Tea Room, the only Chinese restaurant I remember being around in that tender age of America. She'd pretend to know what all the Chinese characters on the wall meant and I'd eat egg drop soup every time.  There was/is some kind of park thing called Quinsippi Island out in the river that I believe one reached by treacherous sky gondola. The only reference I can find to such a thing in Quincy is an Italian restaurant named La Gondola.

There was a sky gondola left over from the '84 World's Fair in New Orleans for a while, so it's possible I'm conflating. More discrete than that a balloon in a tree is the charm of possibly remembering the wrong sky gondola.

Then this from them via here. Tom Waits recorded a new vinyl 78 (why not go shellac, though, if you're going there?) with the Preservation Jazz Hall band of whom I know a couple of members that were on the session, and you can get it in a deluxe package with its own special 78 record player.Not well enough for them to slide me one, I suppose, though I'm open to getting to know people better. I have a closet shelf full of 78's that need a player, preferably one that I don't have to buy myself. The 78 is in an edition of 504, the New Orleans area code, eerily connecting this to the whole phone book thing,

Nick Flynn is good y'all. And so is Badly Drawn Boy, though I wanna steal his hat and Jonathan Franzen's glasses and become a king of all media like Rush Limbaugh used to say he was.. Also good is Jack and Bobby, a disregarded  show from the WB about a kid that will be president one day, like a Wonder Years set in now with future follow through. It is schlocky a bit, but all the main characters are at least a little bit terrible and selfish and the writers have a great sense of piecemealing story tension together.

Dwindling devoted readers, thanks for reading. To steal a line from Magnetic Fields, I only keep this heap for you.